Well this is something that I didn't know! It was sent to me by a good friend this morning...

"The rate of clinical errors in Cumbria’s two hospitals is among the highest in the country, it has been revealed.

Statistics released this week have shown that £5.3 million was paid out to the victims of clinical negligence by North Cumbria Acute Hospitals NHS Trust in 2008-09, the News and Star reports.

One woman who said she is not surprised by the news is Charlene Steel, whose baby suffered a brain injury because of errors at his birth at Cumberland Infirmary. She said she would travel elsewhere if she needed to use hospital services again.

This comes after figures for the UK as a whole showed that clinical negligence payouts reached £807 million last year, up by 22 per cent on the figure from 2007-08.

There were 8,885 claims brought against NHS trusts for medical blunders, it was found.

Anyone affected by errors during their hospital treatment should seek the advice of a solicitor specialising in clinical negligence claims."

I suppose I'm being paranoid, but all 30 of my followers on my Blog have just disappeared! Has it started to happen? Will the rest go overnight? Can anyone think of an explanation?

As you all know, I have been trying to improve the experience of newly diagnosed Prostate Cancer patients at my local hospital in Carlisle. I had hoped that after an enquiry had taken place some sweeping actions might have followed. However, the action plan seemed a bit vague and after showing it at my local support group, the general opinion was that it didn't go far enough.

So the next step was to organise a demonstration, protest, call it what you will. Raising public awareness to something that is killing 10,000 men a year in the UK seemed on balance, a good idea. Highlighting our hospital as somewhere that you will get an inferior experience to that of many other hospitals in the country would be an added bonus.

I even told the hospital of my plans and assured them that it would be peaceful and polite! 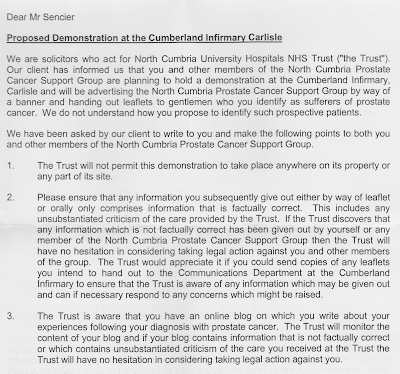 And at the end they tell me that they monitor the content of my blog!!!!!!!!

"If your Blog contains anything that is not factually correct or which contains unsubstantiated criticism of the care you received..."

"...the Trust will have no hesitation in taking legal action against you".

So my thousands of followers are now aware that 'Big Brother' is not just a TV programme.

Can you believe, they would  spend vast amounts of money, employing a legal team to shut me up, and a persons wages to 'monitor my blog', rather than go through the simple low cost process of improving the patient experience in one department of their hospital? 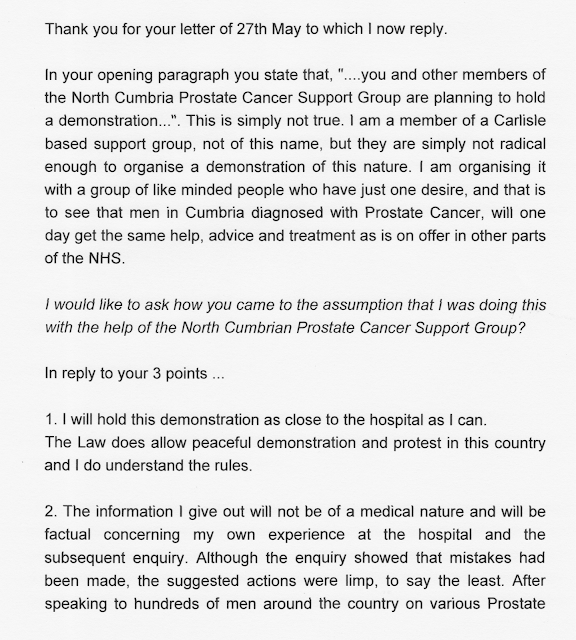 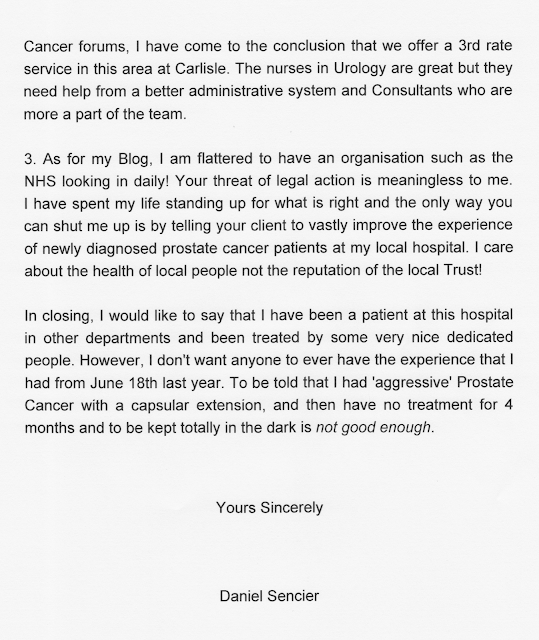 So if I wake up tomorrow and my Blog has gone, then you will truly know the power of the NHS.

What should North Cumbria University Hospitals NHS Trust do?

They should send a team of people, nurses, doctors and administrators, down to Addenbrookes Hospital near Cambridge, a world renowned hospital for the treatment of Prostate Cancer, where I was lucky enough to be treated. They should come back armed with the knowledge of 'What to do' from the very first moment a patient is referred to them. Because, when Helen Kelly (NHS Trust) came to our Support Group meeting, only 1 out of the 25 people present were happy with their patient experience to date, and that is just NOT good enough!
Posted by Daniel Sencier at Saturday, May 28, 2011 15 comments:

This is my Jackpot Winning Lottery Ticket!!!!
Posted by Daniel Sencier at Friday, May 27, 2011 1 comment:

It was 31st March since my last posting on here. Why? I think I needed a break, though having missed 8 weeks of my first year at Uni, I had one hell of a 'catch up' to get my work finished before 19th May. But I did it, and that's first year over with, and I think I've passed!

When I logged on for the first time since 31st March, I noticed that I had another follower, a lady called Daria had become my 30th follower. I was so chuffed and I wanted to thank her, so I went to her Blogg. Sadly she had since died of breast cancer and all I could read was the wonderful account of her life, and funeral. A very sad moment of reflection, how precious life is and how sudden it can end. Thank you so much Daria for taking the time out to think of me, even though we never met. x

On the way to the support group meeting in Carlisle last week, I got done for speeding! Doing 38mph in a 30mph zone. I reckon it was the 5th time I had been stopped in 40 years but the first time that I had not been able to talk my way out of it. I opted for the 'speed awareness' course which will cost me £74 but save me a fine and 3 points on my license. I hold my hand up, guilty as charged.

Oh how I want to tell you about that drive to Barcelona and back, but I am aware that what can seem very exciting to me could bore the pants off others :-) It was faaannnttaasticcc though!

I went to my 44th Army reunion on 7th May! It was like being with a load of old men but hey, I was one of them. We were all great though and they all cheered like hell when I walked in. After the Cancer diagnosis, I'm not sure if they thought I would make it :-)

So tomorrow, the dreaded day comes around again and I go for the next PSA test. I will probably get the result after the weekend and anything under .03 will make me punch the air and run out screaming. Then it's off down to Addenbrookes with the result to meet my hero, Nimish Shah for the 6 month after surgery check up. How can you possibly thank a guy enough who has saved your life?

The blog still gets between 20 and 30 hits a day which is great, and the overall hits total is over 8,000 now which I could never have imagined at the start. Only 24 days until the 1st anniversary of my diagnosis....since then another 10,000 men have died from this disease. I am lucky, and I will continue my work of support, to help the thousands who are not doing as well as I am, and in promoting awareness, to those who still think, "it couldn't happen to me"!