You will never ever share those particular dreams again... 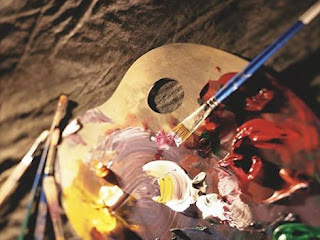 However it ends, whether through death, divorce, or the destruction of the relationship, there is such a sad sense of loss! Everything you've safely known is stripped away. You are left empty, raw, thin, and vulnerable! Even if you were ready to go, or kindly let the beloved go, the departure mangles and angers you.
Yet, somewhere in the mess of the dividing asunder of souls and spirits, there is gratitude and celebration that for a time you collaborated as joint artists. There is sacredness in memory of the special dreams and understandings once unveiled in succulent and intimate ways. There is also a hope that hope itself will begin to heal and fill the emptiness spaces. Not as before, never as it was, but with new colors, a new palette of dreams, and possibilities of unfolding previously uncharted scapes.
You sense that you'll slowly pick up your brush again. You will bravely stand silent in front of an intimidatingly large and empty canvas. You'll wait for the slightest soul-stirring to possess your heart and hands and move them into action!
The first stroke will be the hardest, but assuredly the most freeing!
Suddenly, you'll begin to think in colors you forgot were possible!
“One of the difficulties of leaving a relationship is not so much leaving the person themselves - because by that time, you’re ready to go. What’s difficult is leaving the dreams that you shared together. And you know that somehow, no matter who you meet in your life in the future, and no matter what species of happiness you will share with them, you will never ever share those particular dreams again, with that particular tonality and coloration. And so there’s a lovely and powerful form of grief there that is the ultimate in giving away, but making space for another form of re-imagination.” -- David Whyte
Posted by Daniel Sencier at Monday, May 30, 2016 No comments:

I would like to thank Healthline for once again choosing my blog, to be amongst the top prostate cancer blogs of 2016/17.
When you consider how many blogs there are out there, this is really something I'm proud of. The other 10 selected blogs are all amazing reading in their own way, and in the world of prostate cancer, there's is something for everyone. 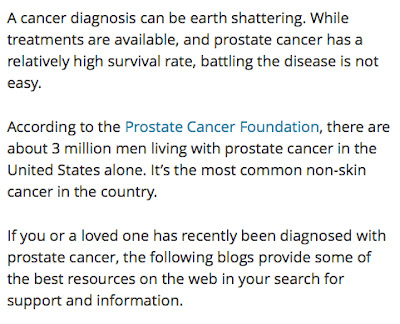 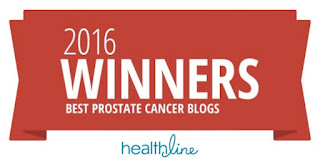 Take a look at the other blogs...

Posted by Daniel Sencier at Wednesday, May 18, 2016 No comments: 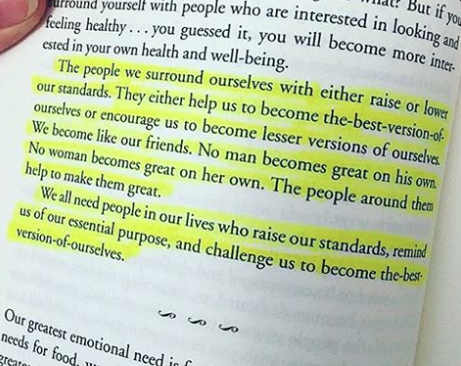 Could this dramatically reduce the amount of prostate biopsies?

Exclusive! 3D ultrasound, US/MR image elastic fusion and Organ-Based Tracking® are combined into a single, easy to use platform that enables physicians to control prostate biopsy precision and quality in order to bring personalized answers to every patient.
At the convergence of urology and radiology, TRINITY® is a premium performance mobile ultrasound imaging system used to assist every prostate biopsy procedure with 3D imaging, prostate mapping, and intraoperative image fusion capabilities within the usual clinical routine.
Its optimal ergonomics with respect to workflow and tactile interface make it the ideal assistant to urologists for the development of an innovative clinical program for prostate cancer management.

DOWNLOAD BROCHURE
Posted by Daniel Sencier at Sunday, May 08, 2016 No comments:

I'm enjoying this, not that I haven't fancied a beer with temperatures here tipping over 40C, it's knowing that I can look at the booze and just leave it, enjoying a glass of iced water or juice instead.

My mindset has changed for sure, I feel stronger and have applied the theories learnt in OneYearNoBeer to other habits that I wanted to rid myself of. It works every time! Excersise is the one thing that I need more of and haven't managed yet, mainly due to the incessant heat outside, but I've changed other habits to give me more exercise. I try not to use lifts and escalators and I'll always choose the long way around. If there's a more difficult or strenuous way of doing something, I will sometimes do it, to the great amusement of others. But that's not enough, I've got to do better, so there's a challenge.
Probably my main concern when I started the 90 day challenge, was how it would affect the chemical balance in my body. Having had cancer surgery 6 years ago, there's always the chance of a bio-chemical recurrence, and in my case, depending on where you look, that chance can be up to 30%. I have 6 monthly blood tests, and last week's result was more anxiously awaited than at other times. But it came back OK, I'm still clear, the alcohol obviously had played no part in keeping the cancer away, how could it? Pomegranate juice is one of my weapons against recurrence, and a low dosage aspirin a day, so far, so good.
Waking up in the morning is still the main problem, my sleep is so deep. If I get up when the alarm goes off, I just feel drowsy until I've had a shower, but if I have a lie in, like this morning, drifting in and out of sleep, I go into what I can only describe as a depressed state, lasting hours. Why is this?

The evening 'habit' has been replaced by coke-zero or iced water, I don't even think about it now. I laugh when the old 'reward' habit kicks in, like it did last week when I found I'd got a job. Wow a job, where's the nearest bar to celebrate? Instead I treated myself to an iced coffee and a snickers bar.
Look out Daniel, there's a habit to replace every habit!


A new type of drug could benefit men with aggressive prostate cancer that is no longer responding to treatment, researchers from the Institute of Cancer Research have said.
In a study on mice, Hsp90 inhibitors were found to strip cancer cells of defences against hormone treatments.
This makes the drugs particularly promising for treating drug-resistant cancers, the research team said.
Prostate cancer is the most common cancer in men in the UK.
About one in eight men will get prostate cancer at some point in their lives. It mainly affects men over the age of 50.
The cancer can sometimes be treated successfully with hormone treatments, which target androgen receptors linked to the growth of male hormones called androgens.
But some prostate cancers don't work that way. Instead they create an abnormal form of androgen receptor which is not linked to the growth of hormones and therefore does not respond to standard hormone treatment.
This is the most common form of resistance in prostate cancer which leads to aggressive, difficult-to-treat cancers.

The latest research, published in the journal Cancer Research, found that a new class of drugs reduced production of both receptors.
Professor Paul Workman, study author and chief executive of the Institute of Cancer Research, said it was an exciting discovery.
"We call Hsp90 inhibitors 'network drugs' because they tackle several of the signals that are hijacked in cancer all at once, across a network rather than just a single signalling pathway.
"These drugs can hit cancer harder than those targeting only one protein, and look promising for preventing or overcoming drug resistance."
Prof Workman said the next step was to test the Hsp90 inhibitors in clinical trials on patients with aggressive, drug-resistant prostate cancer.
Prof Johann de Bono, a professor of experimental cancer medicine at the Institute of Cancer Research, said: "These drugs are already in clinical trials for several types of cancer, and I am excited that our work suggests they could also benefit men with prostate cancer who have otherwise run out of treatment options."
Posted by Daniel Sencier at Monday, May 02, 2016 No comments:

PLEASE if you follow my blog, this is close to me heart...

Please take a minute to vote for Joanna Slater and her amazing 'MyNotes Medical' app that she's spent so much time developing. It will take less than a minute to vote, but this app could save thousands of lives a year, at a time when our NHS needs all the help it can get. It could directly benefit you...

Joanna Slater...."My mother had a standard hip operation in 2007 and fell ill soon after. I started writing notes day by day as a reminder of all the things that was happening to her. Unfortunately, she passed away still in hospital 6 months later. Eventually, I started a blog www.strength-in-numbers.co.uk and posted all my mother’s notes. In 2011, the Mail on Sunday contacted me after seeing my blog and published extracts of my notes then my life changed forever. I received 1000's of emails from people saying they wished they had taken notes and the difference it would have made. That's how the idea of MyNotes Medical was born to help others from my experience by documenting everything. I am committed to the cause of improving patient care and believe that MyNotes Medical will lead to more effective communication between patients, their carers, GP’s and doctors - the key to better treatment. I am on a quest to create a patient-led programme with my business partner Brad Meyer co-founder of MyNotes Medical that will help everyone become more engaged in their own and loved one's medical care to safeguard against medical mistakes."