I'm an ENFP - "The Campaigner"

Go to this link, hit the 'take the test' button at the top right-hand corner. Until you know and understand who you are, it's hard to understand others...


The ENFP personality is a true free spirit. They are often the life of the party, but unlike Explorers, they are less interested in the sheer excitement and pleasure of the moment than they are in enjoying the social and emotional connections they make with others. Charming, independent, energetic and compassionate, the 7% of the population that they comprise can certainly be felt in any crowd

You Can Change the World With Just an Idea

More than just sociable people-pleasers though, ENFPs, like all their Diplomat cousins, are shaped by their Intuitive (N) quality, allowing them to read between the lines with curiosity and energy. They tend to see life as a big, complex puzzle where everything is connected – but unlike Analysts, who tend to see that puzzle as a series of systemic machinations, ENFPs see it through a prism of emotion, compassion and mysticism, and are always looking for a deeper meaning.
ENFPs are fiercely independent and much more than stability and security, they crave creativity and freedom.
Many other types are likely to find these qualities irresistible, and if they’ve found a cause that sparks their imagination, ENFPs will bring an energy that oftentimes thrusts them into the spotlight, held up by their peers as a leader and a guru – but this isn’t always where independence-loving ENFPs want to be. Worse still if they find themselves beset by the administrative tasks and routine maintenance that can accompany a leadership position. ENFPs’ self-esteem is dependent on their ability to come up with original solutions, and they need to know that they have the freedom to be innovative – they can quickly lose patience or become dejected if they get trapped in a boring role.

Luckily, ENFPs know how to relax, and they are perfectly capable of switching from a passionate, driven idealist in the workplace to that imaginative and enthusiastic free spirit on the dance floor, often with a suddenness that can surprise even their closest friends. Being in the mix also gives them a chance to connect emotionally with others, giving them cherished insight into what motivates their friends and colleagues. They believe that everyone should take the time to recognize and express their feelings, and their empathy and sociability make that a natural conversation topic.
The ENFP personality type needs to be careful, however – if they rely too much on their intuition, assume or anticipate too much about a friend’s motivations, they can misread the signals and frustrate plans that a more straightforward approach would have made simple. This kind of social stress is the bugbear that keeps harmony-focused Diplomats awake at night. ENFPs are very emotional and sensitive, and when they step on someone’s toes, they both feel it.
ENFPs will spend a lot of time exploring social relationships, feelings and ideas before they find something that really rings true. But when they finally do find their place in the world, their imagination, empathy and courage are likely to produce incredible results.
Posted by Daniel Sencier at Thursday, September 21, 2017 No comments:

Prostate cancer screening using prostate-specific antigen (PSA) does reduce mortality in prostate cancer, according to a review that used a new approach to analyze data from large clinical trials.
The findings suggest that current recommendations, which advise against PSA-based screening, might need to be revised, researchers write in their report, which was published in the journal Annals of Internal Medicine.
Interestingly, the study, “Reconciling the Effects of Screening on Prostate Cancer Mortality in the ERSPC and PLCO Trials,” used the same source data that the U.S. Preventive Services Task Force (USPSTF) had employed to issue recommendations against screening.
The studies were the European Randomized Study of Screening for Prostate Cancer (ERSPC; ISRCTN49127736) and the Prostate, Lung, Colorectal, and Ovarian Cancer Screening Trial (PLCO; NCT00002540).
The ERSPC reported a 21 percent drop in prostate cancer mortality with screening, while the PLCO found no difference.
But researchers from the Fred Hutchinson Cancer Research Center in Seattle and the University of Michigan, among many others, noted that the studies differed in key factors, including study design and adherence.
For instance, the PLCO screened annually, while the ERSPC screened participants every two to four years. The PLCO also had a higher PSA threshold for referring patients for a biopsy and stopped screening after six rounds, researchers said.
These and other factors made researchers conclude that the PLCO “compared the effects of an organized screening program versus opportunistic screening rather than screening versus no screening.”
To overcome these differences, the research team built a mathematical model that took these differences in “screening intensity” into account.
Using the analysis they discovered that the PLCO control group had been exposed to more intensive screening than controls used in the ERSPC study.
Their analysis further showed that when differences were taken into account there was no difference in the outcome of screening between the trials, which, in fact, showed that screening was beneficial.
Screening was linked to a 7 percent to 9 percent decrease in risk of prostate cancer death for each year of the standardized screening measure.
This translated into estimates ranging between a 25 percent and 31 percent lower risk of death in screened patients in the ERSPC study, and between 27 percent and 32 percent in the PLCO intervention group, when compared with no screening.
Researchers argued that their study overcame the limitations of traditional statistical analyses, and might act to complement study results from the trial when the benefits and harms of screening are considered.
Posted by Daniel Sencier at Monday, September 11, 2017 No comments:

Should you go for 'alternative' cures?

You can, of course, decide not to believe this article, but it's worth reading.... 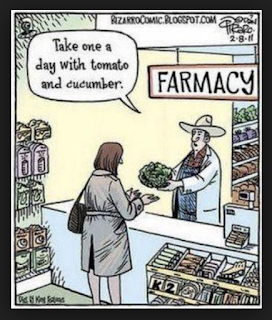 Link to home page of American Family Physician here....AFP
People who choose alternative cures for common cancers are up to five times more likely to die compared to those opting for standard treatments, the lead scientist of a new study told AFP Friday.
The risk of death five years after diagnosis "was highest for breast and colon cancer," said lead author Skyler Johnson from the Yale School of Medicine in New Haven, Connecticut -- 5.6 and 4.6 times greater respectively.
Lung cancer patients who spurned surgery, radiation or chemotherapy in favour of herbs and vitamin, homeopathy, special diets or other unorthodox therapies were more than twice as likely to die over the same period, he reported last week in the Journal of the National Cancer Institute.
Five-year survival rates for prostate cancer remained high -- around 90 percent -- for both conventional and alternative treatments, but this was not necessarily evidence that the alternative therapies were as effective.
"Prostate cancer usually grows very slowly in the early stages so few people die," Johnson explained by email.
Faced with poor prognoses or painful courses of chemotherapy, which can cause severe nausea and weakness, many cancer patients place their faith in a wide range of treatments dismissed by most medical doctors as useless at best.
These include probiotics, vitamins and minerals; traditional Indian and Chinese methods such as Ayurvedic medicine and acupuncture; homeopathy and naturopathy; chiropractic or osteopathic manipulation; as well as yoga, Tai Qi and Qi Gong, all of which involve breath control.
Mind-over-matter approaches also include prayer, meditation, and guided imagery, in which one visualises one's cancer in order to overcome it.
Researchers led by Johnson identified 281 people in the United States with the four most common types of cancer -- breast, prostate, lung, and colon -- who turned towards one or more of these unproven treatments when diagnosed.
The team compared their health outcomes with those of 560 other cancer patients of comparable age, also taking into account race and different health factors.
On average, the first group was 2.5 times more likely to die within five years of diagnosis.
"For several reasons, I believe this may be an underestimate," Johnson told AFP.
To begin with, the data only covered only initial treatment, which means that some of the patients who first sought out alternative cures may have switched to standard treatments as their disease progressed, thus prolonging their lives.
It is also likely, he added, that the non-conventional medicine cohort was healthier, younger and had higher income and education -- attributes that translate into better survival rates.
"We don't know the exact number of people that make the decision to pursue alternative medicine instead of conventional cancer treatment," Johnson said.
Patients are reluctant to confide in doctors who are likely to frown upon their choices, he added.
But, he noted, all the miracle cancer cures on offer probably add up to a multi-billion dollar business.