Here is an article that I wrote for this months edition of 'Expat Life in Thailand'. I love this 'MeetUp' group, an amazing bunch of people from many countries who I've shared wonderful, sometimes slightly crazy memories with... 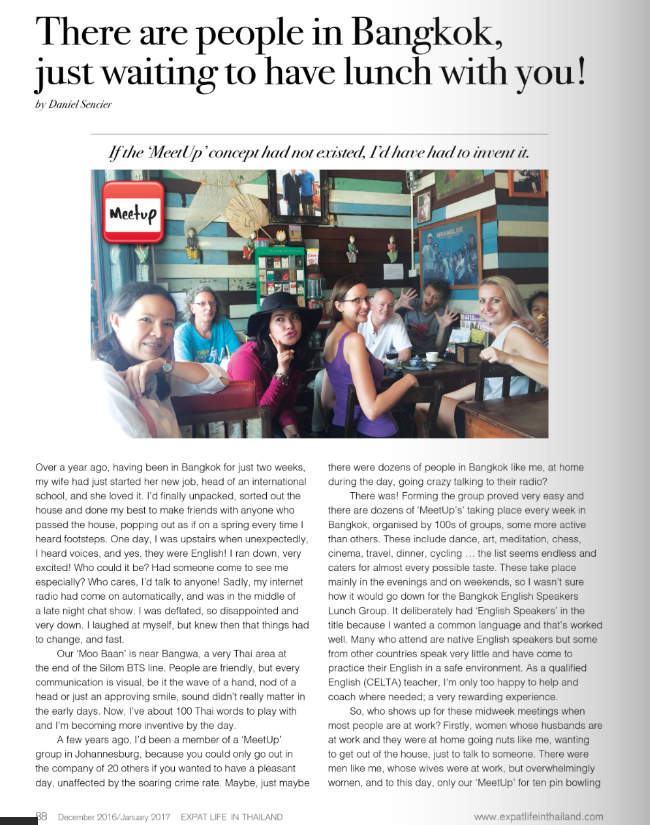 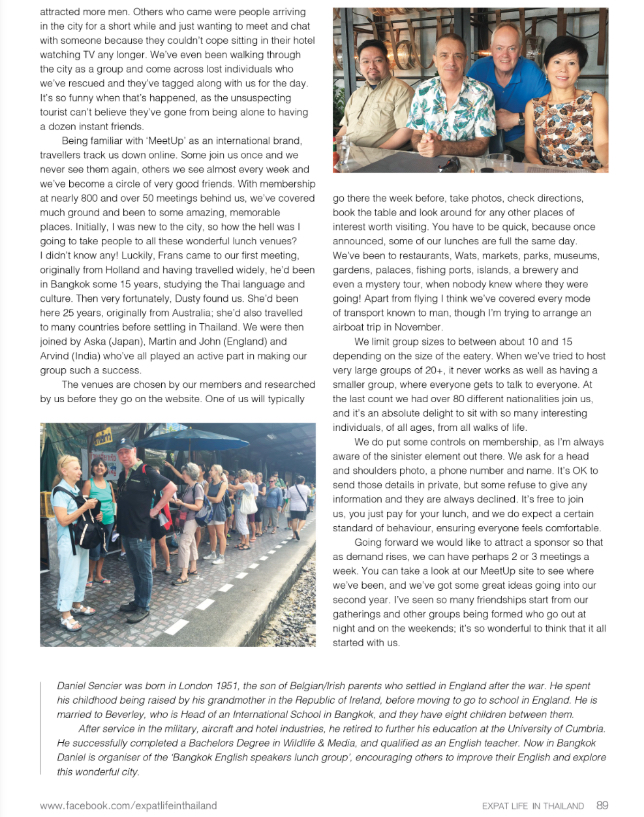 Posted by Daniel Sencier at Thursday, November 24, 2016 No comments:

A drug that has been approved for the treatment of chronic nerve disease such as multiple sclerosis called 4-aminopyridine (4AP) may also be used to repair nerve injury from, for example, prostate surgery, according to a new study.
The study, “4‐Aminopyridine Promotes Functional Recovery And Remyelination In Acute Peripheral Nerve Injury,” was published in the journal EMBO Molecular Medicine.
The procedure for prostate removal is sometimes associated with nerve damage, which may cause incontinence and erectile dysfunction, thereby increasing the refusal of patients of prostate cancer to accept the surgery.
Current treatment of traumatic nerve injury consists of following the patients to see whether the affected nerve can spontaneously recover or if surgery is needed to repair the damage.
However, “the patient who may recover is recovering so slowly that nerve-dependent tissues are in jeopardy, and the patient who needs surgery has to wait for weeks for the diagnosis that surgery is appropriate,” John Elfar, one of the senior authors of the study, said in a news release. “That delay means that surgery is less effective.”
But his team found evidence that 4AP may be a potential way to help the body accelerate the repair of nerve injuries. When traumatic nerve injury occurs, the myelin sheath — the material that surrounds and protects nerve fibers — is affected, and so is the activity of the nerve cells. In mice, daily treatment with 4AP promoted the repair of the myelin sheath, thereby improving nerve cell function.
Researchers also found that mice treated with a single dose of 4AP just one day after traumatic nerve damage (with nerves not completely severed) showed improved muscle function within an hour. This result suggests that 4AP may be used to rapidly diagnose whether a patient has nerve injury treatable with this drug or whether surgery will be necessary.
“This is an ideal outcome for development of a treatment to promote tissue regeneration,” said Mark Noble, the other senior author of the study. “The drug we use to identify injuries that need repair of their insulating myelin is the same drug we use to promote the needed repair. As 4AP has been well-studied in chronic injuries, and is approved for treating multiple sclerosis, the new benefits we discovered can be explored rapidly and much more cheaply than is needed for developing an entirely new drug.”
Posted by Daniel Sencier at Monday, November 21, 2016 No comments:

November is PSA time, but not this year...

Every November and May since 2011 I've been for my PSA test, so why not this month?

Well, one of my friends Simon went on to annual blood testing 3 years after surgery, because as he said, "I won't allow cancer to dominate my life". I admired that but didn't have the courage to follow him.

I asked my doctor in the UK to send through my PSA results from before surgery.
As you can see near the bottom of the table, March 2008: 1.8 followed by May 2010: 4.2, an overall rise of 2.4 in 26 months. In prostate cancer terms that's not bad. It means my PSA doubling rate was well over a year, and that's a good indication of what it would be should I have a recurrence. I have my 65th birthday coming up, then there's a trip of a lifetime to India, and Christmas, so why risk the 8% chance of feeling bad before all that, when it can wait until January.

In January I will go for my PSA test, but this time it will be different. From then on, I will go once every year, every January, after Christmas. I won't allow cancer to dominate my life.

One day I might have to meet that old friend again, but not yet, not yet.

Posted by Daniel Sencier at Wednesday, November 16, 2016 No comments:

Prostate blood test that tells if your life's at risk...

A great piece sent in by my very good friend Sue.... 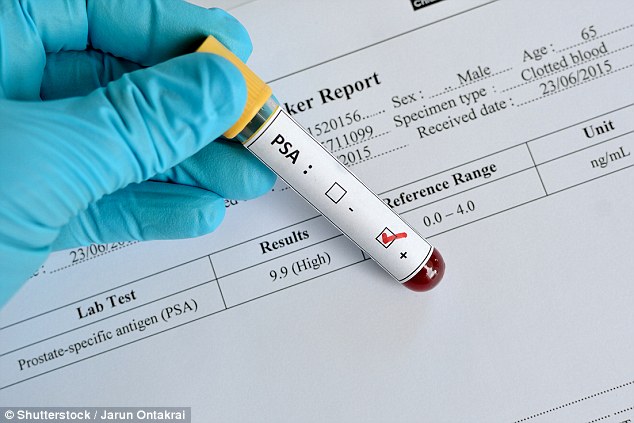 A blood test that identifies the deadliest forms of prostate cancer could save thousands of men from unnecessary treatment while ensuring rapid attention for those whose lives are at risk.
The new method of spotting tumour cells in the blood, discovered by researchers at Queen Mary University of London, is in its early stages.
But if initial findings based on tests on 80 samples from men with prostate cancer are confirmed in bigger studies, it could revolutionise treatment.

Some 47,000 men are diagnosed with prostate cancer in the UK each year but the severity of the disease varies hugely.
Rapid treatment is vital for those with more aggressive forms of the disease, which kills 11,300 men each year.
But if it stays in the prostate and does not spread, it is often best to offer no treatment, an approach known as ‘active surveillance’.
Yet until now doctors have had no reliable way of telling which men are most at risk. Up to 30,000 have a localised, low-grade form of the disease that has yet to spread beyond the prostate. But because there is no reliable way to tell how severe it is, about two thirds of them undergo gruelling treatment including radiotherapy, surgery or both. This can have severe side effects including impotence, incontinence and bowel problems.
In future, testing for circulating prostate cancer cells could help doctors identify high-risk patients who may need radical intervention and spare those at low risk from unnecessary treatment.
The sensitive tests would pick up minute strands of DNA shed by a tumour as it grows. It is one of the first in a battery of ‘liquid biopsies’ that experts think will revolutionise the treatment of cancer.
This approach – called ‘precision medicine’ – enables doctors accurately to target cancers according to their genetic make-up, to closely monitor tumours as they mutate and evolve, and to switch drugs if cancer becomes resistant to a certain treatment. 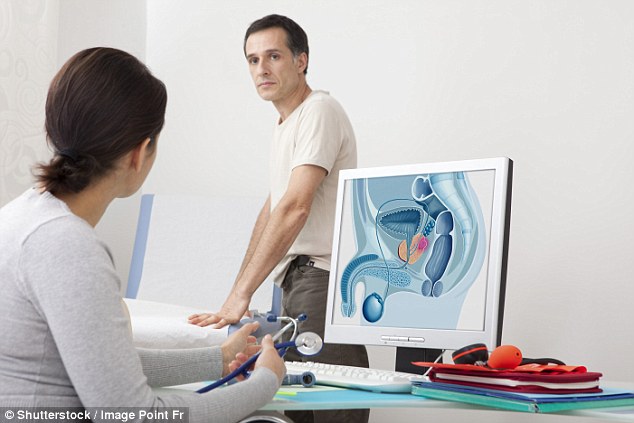 Rapid treatment is vital for those with more aggressive forms of prostate cancer, which kills 11,300 men each year.

Lead scientist Dr Yong-Jie Lu, from Queen Mary’s Barts Cancer Institute, said: ‘Our research shows the number of these specific cells in a patient’s sample is a good indicator of prostate cancer spreading.
‘By identifying these cells, which have gained the ability to move through the body, we have found a potential new way to monitor the disease.
‘If we’re able to replicate these studies in larger groups of people, we may be able to one day predict the risk of someone’s cancer spreading so they can make more informed treatment decisions.’
The findings were presented at a conference of the National Cancer Research Institute in Liverpool.
Dr Iain Frame, of Prostate Cancer UK, said: ‘This research adds to our understanding of what might make prostate cancer cells tick but it’s incredibly early days.
‘A blood test which could detect an aggressive cancer and how best to treat it would be the ultimate goal, but a lot more research is needed before we get there.’

Posted by Daniel Sencier at Friday, November 04, 2016 No comments: