You've come this far, please make a difference by donating now and getting your name etched on our wall.

A big thanks to Sally at 'ihelpuk' (click on this link to view...
http://www.ihelpuk.com/) for this extremely helpful article. We are getting lots of support from so many people and just this week, the University of Cumbria have assured us that they will give us backing with any resources that they are able to give. We are still awaiting that one magic contact who will come forward as our main sponsor and supply our vehicle. Regardless of the cost, it will be sold on our return, so the main sponsor will ultimately spend very little money; if any! You can help by forwarding the link to this blog to everyone you know.
Thank you so much, best wishes, Dan
Posted by Daniel Sencier at Saturday, October 29, 2011 No comments:

Please make a donation, no matter how small, it will really help!

It's all good news with our proposed expedition to Romania in May. If you can make a donation that would be fantastic and help us to make this a great success. (donation button to the right)
Please contact me if you have any questions about Prostate Cancer, diagnosis or treatment. I had no symptoms when I was diagnosed, but I did go for the annual PSA blood test that most men don't bother with. You should make anyone that you love aware of this, they might be very grateful that you did one day! dansencier@yahoo.co.uk 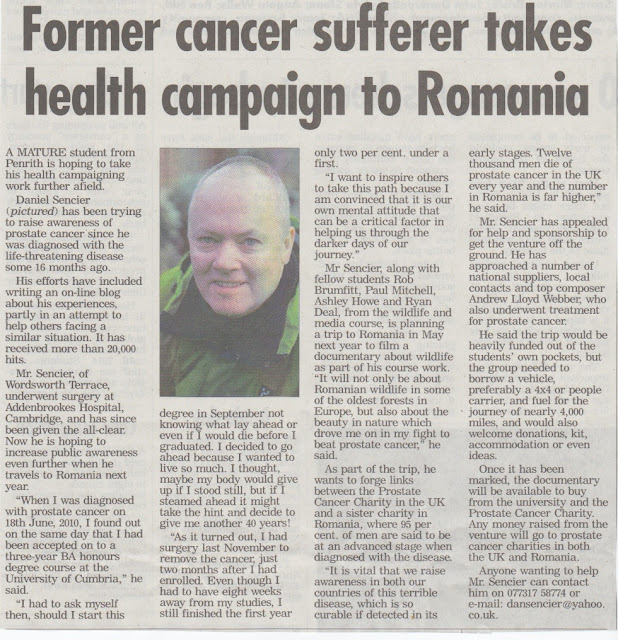 Posted by Daniel Sencier at Wednesday, October 19, 2011 No comments:

Here are the 5 expedition team members.....

Posted by Daniel Sencier at Saturday, October 15, 2011 No comments:


Todays article in the Cumberland News. Please copy & paste to everyone that you know. It will take you a few minutes but could save lives.
Posted by Daniel Sencier at Friday, October 14, 2011 No comments:

When I was diagnosed with Prostate Cancer on 18th June 2010, I found out on the same day that I had been accepted onto a 3 year BA Hons degree at the University of Cumbria. I had to ask myself then, should I start this degree in September not knowing what lay ahead or even if I would die before I graduated. I decided to go ahead because I wanted to live so much. I thought, maybe my body would give up if I stood still, but if I steamed ahead that it might take the hint and decide to give me another 40 years!
As it turned out, I had surgery that November to remove the cancer, just 2 months after I had enrolled. Even though I had to have 8 weeks away from my studies, I still finished 1st year only 2% under a 1st.
I want to inspire others to take this path because I am convinced that it is our own mental attitude after diagnosis that can be a critical factor in helping us through the darker days of our journey.
In May 2012, along with 4 other (very much younger!) students from my Wildlife and Media course, I plan to travel to Romania. We would like to make a documentary wildlife film, which will not only be about Romanian Wildlife in some of the oldest forests in Europe, but also about the beauty in nature which drove me on in my fight to beat Prostate Cancer.
My hope is that we can get the Prostate Cancer Charity in the UK to link with the same charity in Romania, a country where 95% of men are at an ‘advanced’ stage when diagnosed. It is vital that we raise awareness in both our countries of this terrible disease, which is so curable if detected in its early stages. 12,000 men die of Prostate Cancer in the United Kingdom every year and the number in Romania is far higher. Any money that we make from this venture will go to Prostate Cancer charities in both countries, but we will need help and sponsorship in order to succeed.
We will gladly give our time and professional skills, along with a total commitment to succeed. We will also be funding ourselves heavily from our student loans.
To date I have written to the following people and organisations and will continue to write to more in the coming weeks.
Do you know anyone local to you who might be able to loan us a  suitable vehicle?
How can others help?

In Europe this year, nearly 250,000 men will die of Prostate Cancer. Most of those deaths could be prevented by early detection.
Posted by Daniel Sencier at Sunday, October 09, 2011 No comments:

This Blog has been running for about 16 months, getting on for 20,000 hits and even now still gets 20 to 30 hits a day. On Sunday, for the very first time since it all started, the Blog had '0' hits. Many newly diagnosed people find me either through a search on Google, via Facebook or the Prostate Cancer Charity; that's great. When you are newly diagnosed you need to talk to someone and you have questions that your doctor can't answer or even understand. So if you have just arrived on here and think I might have gone away, don't worry, email me on dansencier@yahoo.co.uk and we can make contact in the way that suits you best. Remember, winning the battle that's going on in your head right now is your first step to the future that you very much still have.
Posted by Daniel Sencier at Wednesday, October 05, 2011 No comments: