Blog update & my letter in this Saturday's 'News & Star'.

Plans for our Expedition to Romania are advancing well, and any donations, be it in advice, equipment or money, are all still very welcome.
A massive thank you to the names on the Blog wall who have already helped us over the £600 mark. Also a massive thanks to the Prostate Cancer Charity & The University of Cumbria for their extremely generous and continued help.
My plans are also very advanced to help the North Cumbria NHS Trust do the decent thing and resign before they cause any more damage. As reported last week,(scroll down to see article) the Unions at the hospital have given an overwhelming vote of 'no confidence' in the Trust, the public don't want them at the hospital anymore, and after talking to staff at the hospital recently, one nurse said, "I can't believe that NHS Trust members still walk around the building without masks on!" We have some of the finest doctors and nurses in that hospital who are being managed by very less capable individuals. Will you march to save our hospital?
News & Star this weekend... 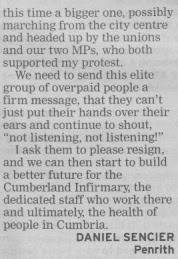 Posted by Daniel Sencier at Tuesday, January 24, 2012 No comments:

Donations welcome for 'Expedition Romania' leaving the UK 1st May 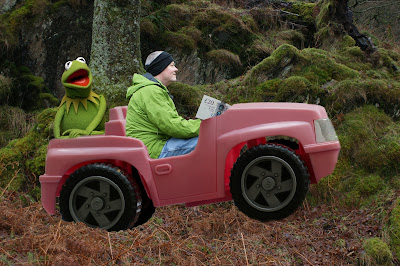 Posted by Daniel Sencier at Sunday, January 22, 2012 No comments:

At last, other larger organisations start to speak out!

By Pamela McGowan
Unions have today united to declare they have lost confidence in north Cumbria’s hospital bosses and call on the entire board to resign.

The Cumberland Infirmary, Carlisle
Eight unions and professional bodies have issued a joint statement in the light of ongoing cost-cutting and subsequent safety concerns at the Cumberland Infirmary and West Cumberland Hospital.
However hospital chiefs immediately hit back, dismissing claims that patients are at risk and calling on union leaders to sit down with them to discuss concerns in detail.
They have been backed by an independent assessor, who was sent to both the Carlisle and Whitehaven hospitals before Christmas due to concerns raised in the media.
Professor Aidan Mullan, who was appointed by the Strategic Health Authority, said that although he had made some recommendations for improvement, overall he did not have any serious concerns about the way patients are being cared for.
However, the unions – including Unison, the Royal Colleges of Nursing and Midwives, GMB, Unite, and the professional physiotherapy, radiography and podiatry societies – have set out a string of specific reasons which have led to them losing confidence in the ability of bosses to manage staff and services safely and effectively.
They include:
The organisations also highlight a recent report into hospital spending, which revealed excessive maintenance payments at the Carlisle PFI hospital, and revelations interim chief executive Neil Goodwin has been paid £129,000 for his first five months in post while most frontline staff have had their pay frozen.
The unions state: “It is the professional opinion of our members that the trust’s cuts and restructuring programmes are not in the interests of patients or the public. Furthermore, it is our position that the quality and safety of patient care is suffering as a direct result of mismanagement of existing resources.
“We therefore declare that we no longer have confidence in the trust to deliver a safe and effective service, and call on the trust executive and board to consider their positions accordingly.
“We are also calling on the relevant authorities to take urgent and robust action to intervene and ensure that the quality of patient care at the trust is protected.”
Posted by Daniel Sencier at Sunday, January 22, 2012 No comments:

This is what a winning lottery ticket looks like! 'PSA less than 0.03' is the magic bit. You know when you buy a scratch card, and you slowly rub out the number hoping to reveal something big? Well it's the opposite to that when you pick up this letter from the doctors. You are handed an envelope and you go down the corridor to find somewhere quiet to open it. You know that the contents could mean radio therapy and more medication, but if you are lucky, it could be 'PSA less than 0.03'. You expect the worse because it's easier to handle if it happens! When you get 'the best', it's  still a shock and you want to cry and laugh at the same time, which I did this morning!


Now roll on 2012, a year where I am now 60 and can look forward to finishing my 2nd year at University with a three week expedition to the Carpathian Mountains of Romania in May. Support from my lovely Beverley, family and friends has been crucial over this past 2 years, and I can't thank everyone enough.


I found out also today that when you are 60, you automatically receive a testing kit for Bowel Cancer from the NHS. But nothing for Prostate Cancer, which far more people die of every year. I am only here today because I went to my doctor and had a PSA test, because my Father had died of Prostate Cancer 20 years ago. Had I not gone to my doctor I would now be dead or dying. If you are reading this Blog, do not make the mistake of thinking that it will not happen to you, or any man that you know who is over the age of 45. Your Dad, brother, cousin, son, friend, whoever you care about, nag them until they go and have a PSA test. Don't let them be one of the 13,000 men who die every year in this country, just through ignorance, when you could have helped them. They may not have any symptoms, they may not even feel unwell!