What do you think?

With reference to our very successful NHS campaign, 2010 to 2012, there were people rightly named on this blog, for a variety of reasons. I was fighting to get cancer treatment, and to improve the path for others in the future. I was also fighting to change an 'attitude' at our local hospital, and soon after, NHS Trusts nationwide were put under the spotlight for their failings. The BBC and the Daily Mail joined in our fight, and hundreds of thousands now benefit from the changes that were made. 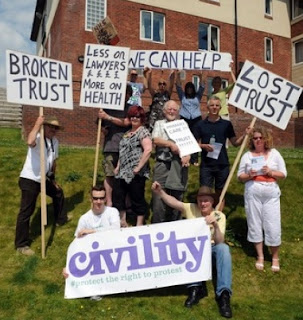 As time passes, and I find myself still in remission, I question whether it's fair to keep those names, 'pinned to the wall'. Like me, shouldn't they be given the chance to move on? What do you think?
Internet blogging can be a useful voice if you see a 'wrong' and need to fight for justice, but it can be a destructive tool on one's own karma, if a line isn't drawn at some stage.
This blog helped me to 'diary' events, and provided a very useful record, that would have otherwise been very mixed up in my mind, at such an emotional time.

If this applies to you, please contact me at dansencier@yahoo.co.uk stating date of entry.

Posted by Daniel Sencier at Monday, August 31, 2015 No comments:

Patients experiencing biochemical failure — defined as an increase in prostate-specific antigen (PSA) level — after prostatectomy for prostate cancer often receive salvage radiation therapy (SRT) to control the disease and prevent metastases.
However, despite SRT, some patients still exhibit biochemical failure. Now, a long-term, single-center study, published online July 9 in the American Journal of Clinical Oncology, has demonstrated that outcomes for 61 men who experienced a biochemical recurrence after surgery, including a subset of 34 men who experienced failure twice (once after surgery and once after SRT), are robust.
The median overall survival was 13.6 years for the men in the study who had two biochemical recurrences and 14.7 years for the men who had just the one recurrence after surgery, report the authors, led by D. Nathan Kim, MD, PhD, from Texas Oncology in Waco.
Furthermore, the 10-year prostate-cancer-specific, metastasis-free, and castration-resistant-free survival (from the time of PSA failure after SRT) rates were all in excess of 70% for the men who had two biochemical recurrences.
The new retrospective data might be of service to clinicians in discussions with anxious patients because there is a "paucity" of prospective data about this clinical scenario, the authors suggest.
The extensive follow-up period makes the study one of the longest in the literature. Median follow-up was 126 months after SRT and 112 months after SRT failure. Most studies have a median follow-up of less than 90 months after SRT.
"Because of our long-term follow-up, we were able to make observations in those patients who recurred despite SRT," the authors write.
Although their study was of a single group of men, and thus not comparative in any way, the authors observe that another study on natural history after PSA failure demonstrated that the median time to distant metastasis was 8 years after PSA failure after radical prostatectomy (without SRT), and roughly one in three patients developed distant metastases within 5 years without radiation therapy.
"In our series, distant metastases-free survival at 5 years was 94% for all patients, and was 75% for those who failed after SRT," the authors report.
"The study suggests that SRT is effective in preventing prostate-cancer-specific mortality and decreases the rate of distant metastases," the team writes.
The new study also raises the issue of the timing of radiation therapy after prostatectomy.
Patients with pathologic T3 disease or positive margins are candidates for postoperative radiation therapy, said Colleen A.F. Lawton, MD, past chair of the American Society for Radiation Oncology (ASTRO) board of directors, who was not involved in the study.
This recommendation is based on the American Urological Association/ASTRO guidelines on the use of adjuvant and SRT after prostatectomy, which is endorsed by the American Society of Clinical Oncology (Int J Radiat Oncol Biol Phys. 2013;86:822-828).
PSA levels determine what's next for these patients, Dr Lawton told Medscape Medical News.
Patients with adverse pathologic features, such as seminal vesicle invasion, positive surgical margins, and extraprostatic extension without evidence of disease recurrence (i.e., undetectable PSA levels), are candidates for adjuvant radiation therapy (ART), said Dr Lawton, who is from the Medical College of Wisconsin in Milwaukee.
Patients who show increases in PSA at any time after surgery are candidates for SRT, she explained.
Patients with pathologic T3a disease should see a radiation oncologist and discuss whether they are candidates for ART or SRT, Dr Lawton said. "The issue is that many patients do not consult with their radiation oncologist," she told Medscape Medical News.
The new study findings do not challenge the guidelines, she suggested.

The study provides food for thought, but is not practice-changing.

"The study provides food for thought, but is not practice-changing," said Dr Lawton.
Nevertheless, in this study, the authors indicated that 70% of their patients would have been candidates for ART based on their pathologic stage and margin status. They emphasize that "without concrete evidence from randomized clinical trials, one must seriously consider the advantages and disadvantages of ART versus SRT."

"The decision of whether to use ART or SRT remains an area of active debate, and prospective randomized trials are currently underway to attempt to answer this question," they add.
The authors were referring to the RAVES trial (NCT00860652), which is a phase 3 study investigating the timing of radiation therapy for prostate cancer with high-risk features.
Active surveillance is indicated for men with a PSA level of 10 ng/L or less, a Gleason score below 6, and a pathologic disease stage of T2a or less, said Dr Lawton. She explained that if patients have pathologic T3 disease and undetectable PSA, other factors should be taken into account when deciding on management, including the presence of comorbidities.
Study Details
The analysis involved 61 men treated at the University of Texas Southwestern Medical Center in Dallas from 1992 to 2000 who underwent SRT following biochemical recurrence after prostatectomy.

Pathologic T-stage, Gleason score, seminal vesicle involvement, and pre-SRT PSA were associated with freedom from PSA failure.
For patients who failed SRT, the median time to biochemical recurrence after SRT was 30 months.
A total of 19 patients (68%) received androgen-deprivation therapy.
Early SRT failure correlated with a significant decrease in distant metastases-free survival and prostate-cancer-specific survival. Ten-year distant metastases-free survival from SRT was 43% (recurrence at 1 year or sooner) versus 91% (recurrence at 1 year or beyond).

The study begs the question of whether biochemical failure is an important surrogate for clinical care in prostate cancer. Dr Lawton indicated that it is an important surrogate; however, there is no absolute proof about its being associated with survival.
Am J Clin Oncol. Published online July 9, 2015.
Posted by Daniel Sencier at Friday, August 14, 2015 No comments: