Oh how good it was being back at Uni on Thursday; my first day back but the last day of term. I got such a nice welcome from everyone and have made some lovely friends in such a short space of time. It made me realise how hard it will be in two and a half years to say goodbye to everyone! I handed in my photography assignment (thanks for your support Martin & Paul), so now I only have to catch up on Ecology, Biodiversity & Expedition Planning!!

Yesterday, we went to meet with Helen Kelly, from the local Primary Care Trust, who has been investigating my concerns over the local hospital's handling of my treatment. All credit to her, no whitewash! She dealt with each point in turn, admitting that there had been several mistakes, unnesecarry delays and very poor communication on the part of the hospital. She has promised change and wants to involve me in the process. She has also offered to come and explain those changes to our local support group meeting in February. I came away happy with her reponse and attitude, knowing that if she does stick to her word, there is a better deal awaiting future prostate cancer patients in Cumbria. I now just have to go through the same process at my doctors to find out why there was long delays there also. The main thing that surprised me was, that my doctor was kept well informed of my progress by the hospital, but I, the patient, wasn't!!! My doctor certainly didn't keep me up to date with what was going on!

http://www.pbs.org/newshour/health/prostate/walsh_extended.html
This is a good link if you want some more information on Prostate Cancer.

In response to some questions, here is just a little more detail on what I can expect when recieving my feedback of histology on 7th January.
There is statistically, a 15% chance that this cancer has spread to my lymph system. That means there's an 85% chance that it hasn't! I'll take those odds, wouldn't you? I just need to be lucky. A spread to the lymphs is a journey down a long road of progression that I would prefer to not to travel, but for which there are marvelous treatments now, which can hold things back for years. No spread to the lymphs could mean that radiotherapy would be able to mop up any rogue cells left on the site after surgery, and carries with it the possibility of a complete cure. However, 46% of people will experience the return of the disease locally somewhere within a ten year period, but I will be in the 54% who don't; I've decided!

Great progress physically this last week. Still hard to sit down without a soft cushion, but generally dry, though I did discover that sneezing can have its problems!! I've discarded the 'deep vein thrombosis' stockings a week early, my god how I hated them! Had 2 pints of Guinness mid week which made the night time a little damp. but not too alarming! Then on Friday we had a great night out with Cherry & Kim and I made the mistake of drinking Guinness all night. Well I was in the toilet so often that the landlord must have thought I was dealing drugs! Had I had my toolbox with me I would have plumbed myself into the nearest radiator! Maybe I will become a wine drinker at the pub, I just can't do 'quantity' drinking anymore!

I think back to my Dad dying of this terrible disease and how much help is availble now that was simply not on the menu then. Both my brothers are active now in watching for any symptoms and I would still like to shout out to ANYONE who is reading this blog, as I have many times ............
ASK ANY MAN YOU KNOW AGED 50 OR OVER WHO YOU CARE ABOUT, WHAT HIS PSA LEVEL IS. IF HE DOESN'T KNOW, TELL HIM TO GO SEE HIS DOCTOR FOR A SIMPLE BLOOD TEST AND WITHIN A WEEK HE WILL KNOW. YOU COULD SAVE HIS LIFE - DON'T LET HIM LAUGH IT OFF!
30,000 men a year are diagnosed with prostate cancer, 10,000 die from it, YOU can make a difference to someone. Caught early, the chances of a complete cure are very real, and wouldn't that be better as a Christmas present than what's on your list right now? 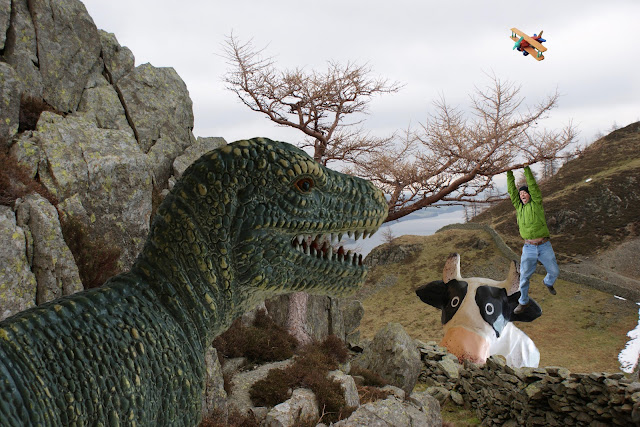 Many of you have asked how this situation came about......
Well, the dinosaur lives in a cave just above Lake Ullswater, a closely guarded secret and very few people apart from local farmers have ever seen it. To try and lure him out of the cave for my wildlife photgraphy assignment, I used myself as bait, hanging from the tree pretending to be a chimpanzee, his favourite food; which are also rare in the Lake District! It all went wrong when the replica cow showed up beside the wall, the dinosaur seemed terrified of it! Just after the photo (on auto shutter) was taken, I fell onto the startled cow, who then ran back down the field, trampling two tourists and a national grid inspector along the way. The dinosaur gave chase, but everytime the replica cow turned, and stared back at it, he froze in terror, seemingly haunted by the large scary eyes of the fake cow. I passed out after falling off the cow and flying head first into a badger set. When paramedics arrived and I told my story and tried to explain away the three dead badgers, but was detained under the mental health act for 28 days. The replica cow and dinosaur? Vanished! Not even footprints! How is that possible? I am still trying to trace the pilot of the light plane hovering overhead at the time, perhaps the only witness to this unlikely event.

We have a 'German Market' in Penrith right now, not that I noticed many Germans, but definately a European flavour to it with some great meats, cheeses and other foods. A real Christmas feel with the roads again, white with crispy snow, as I helped Beverley to hand deliver her Christmas cards. She says it's more personal, but I know Yorkshire folk, and if there is one thing they hate, it is spending money when they don't have to :-) That said, she is the most generous and caring person that I have ever met.
Posted by Daniel Sencier at Saturday, December 18, 2010