What a great week! Well I can say that now, but I wasn't really looking forward to it! Mid week I had the privilege of videoing a school's nativity play and it was just fabulous. I like photographing wildlife but you just can't get better for surprises than young children. 3 to 6 year old boys and girls who did an 'alien' take on Christmas when a spaceship landed near the school. My favourite part had to be when the cord attached to the spaceship got tangled up, and at first it couldn't land, then finally plummeted to earth with a good crack onto the hall floor as the kids roared with laughter!

We left Penrith about 2pm on Thursday, arriving down in Cambridge at 7pm. Stayed in the same place, a Premier Inn owned by Whitbread who I used to work for. I had the fish & chips for dinner; I think it was the 'hand battered' that attracted me, after all, fish is fish isn't it? Well no! This fish really did melt in my mouth, I could have poured it off the plate and drank it had I wanted a fish-shake! I asked the waitress if it was Cod, Haddock, Coley or maybe some lesser known fish from the north sea? She said it was hidteyrhftg! Well it sounded like that! A Vietnamese species that was, apparently becoming very popular in the UK! I think not! I suspect that these fish are being bought for less than a penny each, from some tiny fishing port near Quang Ngai, probably starving the local population as a result, and then being shipped to the UK to be sold as 'fish', for 500 times it's cost. Well it's no surprise from a company who gets it's chickens from Thailand and Beef from Argentina, then asks you to keep your towels on the rail, so that they can be used again; because they are so concerned about what detergent will do to the environment!

I'm not sure what I was expecting when having my Catheter removed, after all, if there is one place that a guy might be scared to have a stick stuck into, it's not his eye! It was a soft flexible tube and I had become rather used to it. I could sleep all night without getting up to go to the toilet and watch TV all evening, having as many glasses of wine as I liked, with just an occasional feel to check the leg bag perched warmly on the side of my leg. With temperatures of -17 outside last week, going out was treacherous as there was still heavy snow on the ground, but the thought of the tap on the bag freezing over was also prominent in my mind! Driving was easy as one only had to stretch a leg from the car to achieve relief. You could say that I became lazy and yes, I got used to it.

So laying down on the bed, as the nurse told me to take a deep breath, saying "this won't hurt at all, it will just feel a little uncomfortable", didn't work for me. I was convinced that she was going to pull a train out of my now, terrified shrunken Penis, as I screamed until eventually passing out. Nothing of the sort! It was almost pleasant, but having said that, I wasn't going to ask for seconds and I felt such a relief that it was out...pheeewww!

I then had to pace the corridors of Addenbrookes drinking water for 3 hours just to make sure that all this liquid was not coming out through any other than the intended hole. All in order, we set off back for Cumbria with a good supply of towels in the car boot. The next problem came when we became stuck in a 3 mile tailback on the A14. The traffic was not moving, but the litre of water I had taken in the past hour certainly was, and gathering fast in my bladder. Pain started to build, but nothing like the pain I was about to experience ten minutes later as I started to sweat and go very pail. I had to go and it didn't matter where, it was happening now! I flung the car door open and with traffic stationery in all 3 lanes, I pulled my pants down and just let it go. Yes, I could have been arrested and yes, the other motorists thought I was disgusting, but you know.....I didn't give a shit! The relief was ecstatically unbelievable and I can't ever remember feeling relief such as that. The rest of the journey was mainly uneventful and I even drove the last leg back into Cumbria. Where had all that snow gone in just a day?

My first night was completely dry, though I did have to get up every two hours as my bladder had shrunk to the size of golf ball. The day so far has been good with just an occasional small dribble, but well within expectations at this stage. In some cases, incontinence can be unbelievably bad!!!! 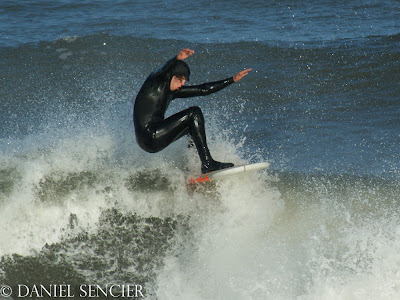 Pelvic floor exercises continue now and I must start doing some serious walking to get a bit of fitness back. I have put a letter of 'extenuating circumstances' in at the University, which they will take into account when judging and marking my first year.

Next BIG date? It's on 7th January when I go back for my Histology.
Best case scenario is that they have got everything and there is no need for radiotherapy.
But because I know it was a Gleason 8, all be it with a relatively low PSA, I think it more likely that I will need radiotherapy, but will be over the moon if there has been no spread to the lymph nodes. All I can do is wait, hope and enjoy Christmas.

Next BLOG next weekend my friends, hope you all survive the shops!!!!!
Posted by Daniel Sencier at Saturday, December 11, 2010