Slowed the progression of prostate cancer in 80% of men 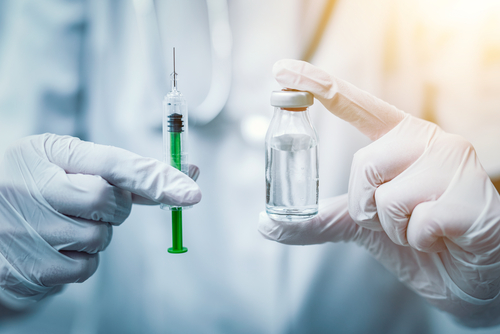 Six injections of OncBioMune Pharmaceuticals‘ prostate cancer vaccine ProscaVax stopped the progression of the disease in 80 percent of patients in a Phase 1 clinical trial, the company announced.
The results applied to patients who had been treated for 19 weeks. All the participants had cancer that had returned after other treatment regimens.
“All the data to date is consistent with previous study data showing ProscaVax elicits immune responses to fight tumor growth in prostate cancer,” Dr. Jonathan Head, chief executive officer of OncBioMune, said in a press release. “We are impressed that 80 percent of the patients treated with ProscaVax demonstrated stable disease” — that is, no progression.
ProscaVax immunizes patients against the protein prostate specific antigen, or PSA, high levels of which are associated with cancer. The vaccine includes PSA plus two immune system activators, interleukin-2, or IL-2, and granulocyte-macrophage colony-stimulating factor, or GM-CSF. It is designed to boost the immune response against prostate cancer cells.
The ongoing Phase 1 trial (NCT02058680) is evaluating the vaccine’s effectiveness against recurrent  prostate cancer in patients whose PSA levels had increased for more than six months before the trial started. The study is also assessing the vaccine’s safety.
In the Phase 1a part of the trial, the 20 participants received vaccine shots at weeks 1, 2, 3, 7, 11, and 15.
At 19 weeks, in the first patient follow-up, researchers discovered that the cancer of 16 of the 19 patients had failed to progress. Among the four patients whose disease progressed, three had higher PSA levels. Imaging indicated that the cancer of the other had spread to the brain.
Researchers also found the vaccine to be safe. They observed no serious adverse events or dose-limiting adverse events in the 30 days after vaccination began.
OncBioMune is conducting additional analysis to determine whether the vaccine can increase patients’ immune response against PSA and decrease PSA doubling times — a measure of cancer progression.
“We look forward to continuing to follow the patients in this study to collect additional data and also to conducting a larger study to further validate the therapeutic benefit of our vaccine platform technology,” Head said.
The Phase 1b part of the trial will involve patients receiving booster shots at weeks 27, 35, and 43, along with IL-2 injections at weeks 23, 31, and 39.
The Phase 1 trial is being conducted at the University of California San Diego Medical School, with support from the U.S. Navy Cancer Vaccine Program.
Posted by Daniel Sencier at Thursday, November 16, 2017