They will never forget how you made them feel.... 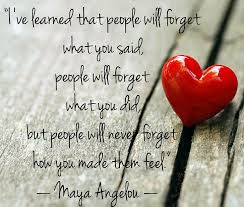 When I was diagnosed with cancer, some seven years ago, I thought I was about to say goodbye to a life I had, in the main, really enjoyed. At the time, my friend Charlie became a great support, sending many an encouraging mail. We joined the Army together as 14-year-old boys on 9th May 1967; hard to believe when I look at kids that age now! We were both top of our tree when it came to athletics and a guaranteed gold medal for our unit every time we competed. We both went on to gain Regimental and British Army colours! I guess that’s why we both look at our bodies now, and think, what went wrong?

How sad I was then, a few years back, to hear that Charlie had been diagnosed with Motor Neuron Disease (MND), putting him now ahead of me in the river of life, but still not far enough ahead to hear the falls! Of course, none of us really know where we are on that river; the falls can come at a seconds notice. I may yet overtake my friend, life’s like that, and all that Charlie and I can do for now, is the same as anyone else - enjoy the river.

When we are gone, all we really leave is our reputation and how we made others feel. Charlie’s reputation is very much embedded in this letter he wrote to me recently and has given permission to publish. At a time when you might think he would be caving in, he’s thinking of those around him and making it as easy for them as possible; that’s the mark of the man!

Swim on my friend, there's many a bend yet, and I'm right behind you...

Many apologies Dan – like you I got caught up in things to do – not least building up a presentation and preparing for a Q&A session with my local Hospice – and the local CCG (Clinical Commissioning Group). I attend the Hospice once week – daycare – for a bit of light relief and a chat with a few other MND affected people as well as a few cancer patients. It is quite humorous talking about what will, in all likelihood, kill us. It is a no holds barred discussion about what is affected, the cures, the care system and end-of-life stuff – quite uplifting too. The hospice staff are a great bunch of people and it was they who wanted to know more about MND and in particular how it is affecting me. The CCG are coming along too because they also want to know more about my experiences with the care system and how they might improve things – they want to give a presentation to the CCG Board of Directors so I took the opportunity to double up on the day. Quite looking forward to the day.

I was recently rather perplexed by the host of questions the hospice staff were asking about my mental state – they have a set of standard questions that give them a ‘score’ indicating ‘state of mind’. I had scored a ‘zero’ in all their graphic scores – not heard of before – and they thought I was maybe hiding some issues from them – but I have been tested many times and always come up with zero issues. My explanation is simple:

Seem to have done the trick. The neurologist suggested that it was OK to get angry at the way this disease gets to you – but I replied that ‘I could’ but it doesn’t help Mags – the main carer – to see me getting angry with myself or feeling sorry for myself. It is a fine line between sharing and caring. I tread that line with great care – but err on the side of humour and positivity. I think it helps her a great deal to know that I am OK with MND and whatever it will bring.

About that ‘ hereafter’ stuff: science would have us believe that matter (in whatever shape or from) remains constant – just gets changed – so I can see how those Roman soldiers are still ‘with us’. But thinking about that – if we are just a collection of atoms arranged in a particular way for a period of time then why not believe in ‘re-incarnation’ of atoms – so with that logic we must all have something of the past within us – and something of the universe too – star child springs to mind (Arthur C Clarke). What if we could find those ‘particular atoms’ and recreate them – hey – Frankenstein!.

Thanks for thinking about stopping or reversing MND – one day I’m sure – but just maybe not today – but I live in hope.

I still don’t hear the crash of the waterfall – but like you – I know it’s there.