Australian scientists have found a genetic marker that could identify which men are likely to develop deadly metastatic prostate cancer and may pave the way for effective treatments.
The federal government is investing almost $800,000 into researching how prostate cancers spread and become impervious to conventional treatment. 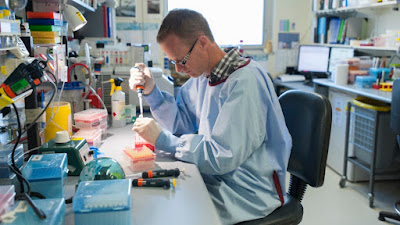 Roughly 3500 men died of prostate cancer in Australia in 2018, according to national data.
While localised prostate cancer has very good outcomes - the overall five-year prostate cancer survival rate is 95 per cent - patients with metastatic disease do very poorly.
The majority of these metastasised cancers are resistant to conventional treatments - androgen deprivation therapy - and become untreatable.
Just 30 per cent survive more than five years if the cancer spreads to other parts of the body.
Dr Philip Gregory at the University of South Australia will receive $782,078 from the National Health and Medical Research Council (NHMRC) to investigate a novel molecular pathway that could lead to new, effective treatments.
Dr Gregory’s team found the RNA-binding protein 'Quaking’ is switched on in prostate cancer cells that metastasise.
“Surprisingly we found levels of this [molecule with this specific protein] are strongly indicative of cancers becoming more aggressive and resistant to the therapies,” Dr Gregory said.
This finding was the springboard for the grant.
“We are trying to understand how this molecule functions in prostate cancer. It changes the way genes are spliced so we are hoping the molecule or gene splicing signature might be able to diagnose which prostate cancers will become aggressive,” Dr Gregory said.
“We can make better decisions in terms of treating patients if we can see which particular cancers look to have an aggressive phenotype. Maybe we would take out a tumour earlier or give them more aggressive treatment."
He hopes to eventually be able to design new therapies that would make the cancers less aggressive and more susceptible to hormonal treatments.
“One of the unique things about this molecule is that it works not by controlling levels of genes, but how the gene is spliced within cancer cells. It’s a new way of thinking about how cancer spreads,” Dr Gregory said.
Health Minister Greg Hunt said the research had the potential to save and protect lives.
“This critical research project is among NHMRC grants worth more than $526 million,” Mr Hunt said.
“Through the 2018–19 budget we provided a record total of $6 billion to Australia’s health and medical research sector."
Mr Hunt said since 2013 the government has contributed more $70 million towards prostate cancer research. In 2018 the government subsidised MRI scans for prostate cancer checks.