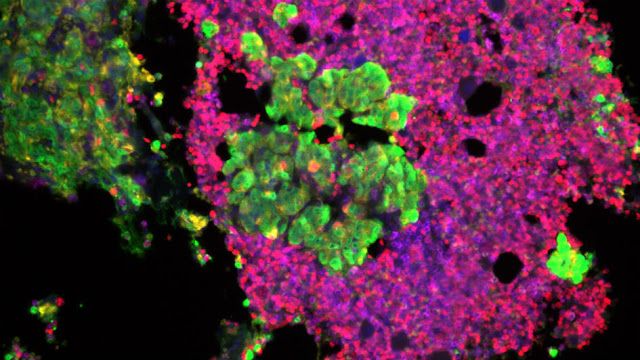 A cancer-driving protein is found in the tumours of men with advanced prostate cancer after treatment with hormone drugs but rarely found in early-stage disease, a new study shows.
The findings of the major study, published in the Journal of Clinical Investigation, confirm the importance of a protein called androgen receptor splice variant 7 (AR-V7) in resistance to hormone drugs in prostate cancer.
The research, led by scientists at the ICR in collaboration with researchers in the US led by the University of Washington, also suggests that researchers should look for new treatments that negate its activity.
In the study, the researchers examined biopsy samples from two groups of men treated for early and advanced prostate cancer.
They developed a new antibody to detect AR-V7 in prostate cancer cells, which allowed them to map its levels much more accurately than before.
AR-V7 was found in biopsy samples from three-quarters of men whose cancer progressed after treatment with hormone therapy, and expression increased further in men treated with the advanced hormone therapies abiraterone and enzalutamide.
But the scientists detected it in less than 1 percent of patients with early-stage prostate cancer, before treatment with hormone drugs.

Prostate cancers use the hormone testosterone to grow and develop. Abiraterone and similar drugs target the androgen receptor, which is found within cells and detects testosterone.
Despite the success of hormone therapies like abiraterone, resistance to treatment often occurs due to mutations and structural alterations which side-step androgen receptor blocking to keep signalling active.
The study highlights the important role of AR-V7 in this process and suggests that drugs developed to reduce its activity could make treatments like abiraterone more effective.
Men without AR-V7 survived nearly three times as long on average compared with men whose tumours tested positive for the protein, when treated with therapies targeting the androgen receptor before chemotherapy, the study showed.
The researchers also identified a specific 59-gene ‘signature’ in men with high levels of the protein, which could identify drug targets for new treatments in advanced prostate cancer.

Leader of the study in the UK, Professor Johann de Bono said:
“This is the biggest study to date of AR-V7 protein expression in tissue biopsies from men with early and advanced prostate cancer and shows that the emergence of the AR-V7 protein in cells is an important event in the development of resistance to hormone therapies like abiraterone, which was discovered at the ICR.
“We saw that AR-V7 expression is rare in the early stages of prostate cancer, but emerges after hormone therapy alongside other mechanisms of resistance – highlighting its importance in the biology of advanced prostate cancer.
“If novel therapeutic strategies could prevent AR-V7 expression during hormone therapy, it could improve outcomes for men with lethal prostate cancer.”
Source: The Institute of Cancer Research