"We get up in the morning, we do our best, nothing else matters" 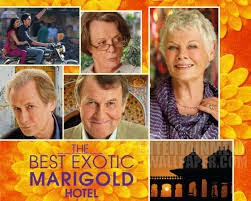 People in South Africa and neighbouring countries treat their old people with so much dignity it overwhelms me to see. Their opinion is sought before any family decisions, they are shown respect by the young, they are always put first and they are looked after at home until the day they die.
I compare this to the UK where people are far wealthier, but the majority of old people are simply not wanted or respected. They are eventually left to die alone in their homes, care homes or hospitals. This film has so many messages to make you really think about how you should think…young or old...

"I see life as a privilege, not a right"

"There is no past we can bring back by longing for it, only a present that builds itself as the past withdraws"

"The only real failure is the failure to try, and the measure of success is how we cope with disappointment; as you always must"

"Can we be blamed for feeling we are too old to change, too scared of disappointment to start it all again"

"The person who risks nothing, does nothing, has nothing"

"We get up in the morning, we do our best, nothing else matters"

I've watched the film six times now and it just gets better. Be careful, it might change you!
Posted by Daniel Sencier at Saturday, June 07, 2014