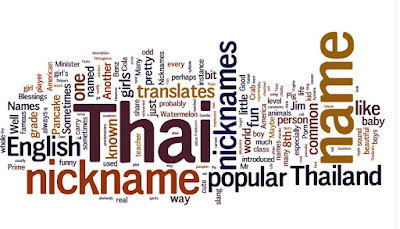 Just about every Thai person has a nickname by which they are known informally, given to them by their parents at birth. The pervasive use of nicknames in this way apparently comes from the old belief that evil spirits ( ปีศาจ ปีศาจ ) are constantly on the lookout for newborn children to snatch away and control, but using a nickname instead of a normal Thai name confuses the spirits and helps to keep the child safe. This is not a widespread belief nowadays of course, but nonetheless the use of nicknames remains so widespread in Thailand that it's not uncommon for friends to know each other for years and yet not know each other's real name and surname.
The nicknames given may be a contraction of their real name, but most often Thai parents take inspiration for the nickname from a wide variety of other sources instead. Names based on someone's appearance at birth are common. I've come across a variety of others, such as 'Link' 'Stingray' 'Hulk' 'Tree' 'King' 'Gold' 'Moo' 'Cake' and 'Ping-Pong'.

So can I have a Thai name? Why not!

I have decided on 'Bacsi', pronounced 'Bartchi', similar to 'Bhaji' as in 'Onion Bahji'; don't you love them?

A few years back, I was visiting a small but wonderous town in Romania, called Ozsdola. The locals started calling me, 'Daniel Bahji'; well that's what it sounded like. When I enquired, it was a word of respect, usually given to older people. Not always though, you had to earn it, and it could be taken away if you didn't deserve it. So you couldn't give yourself that name, it was bestowed upon you. I was proud to be 'Daniel Bahji'.