A blissful feeling as I sit here at home on a Saturday afternoon, watching the football, thinking back to Tuesday morning as we set off on our journey to Addenbrookes. How could so much have changed in just 5 days! If any of these events seem a little muddled, it's because my head is still that way.

The journey down took about 5 hours and you can imagine what we talked about most of the time. We had no idea when we would be coming back, but Thursday at 5pm was the plan if all went well. We checked into the hotel and then went to look at a few of the places that had been offered for our stay during Jan/Feb when I have Radiotherapy. They were all very nice, but one in particular, a cottage on a   village green with a duck pond and stream flowing past, seemed idilic. After checking these places out we went back to the hotel, got changed and went for a lovely meal at the Oak Bistro. We jokingly referred to it as our 'last supper', but there was a chill to the thought! I had the artichoke soup followed by Swordfish, it was delicious washed down with a shared bottle of red. Couldn't overdo the alcohol before this event! "Would I like a dessert?" the waiter asked. The Blackberry and Apple Crumble with custard looked hot favourite, but no, hold on, the custard would break my 'dairy free diet'! Sod it, I would have this favourite of mine, after all, it could be my last!

We had a lovely evening, laughing and joking most of the time, well what else could we do? It was a bitterly cold night and as we drove back to the hotel, there was a feeling that the fun was over. I took some diazepam and Beverley some stuff to make her sleep, but there was probably nothing that was going to make it happen, and we had a very restless night.

The alarm went at 5am, this was it, reality kicked in. I could have nothing to eat or drink after midnight, so even a cup of tea was not available as a welcome to this day. I flushed down my antacid tablets which would stop the acid from my stomach burning my throat when they put me on a tilt during surgery. The funniest bit was yet to come though. I had to push two suppositories up my bum as far as I could. After 30 minutes I was assured that everything in my body would hit the floor, so to make sure I was hanging over a toilet bowl. I was provided with latex gloves (yes, for both hands!) so assumed that this would make it easy; not a chance! I couldn't get them past the entrance; there was simply no lubrication as I forced my finger further up, wondering if I had actually found the hole! Eventually, with a bit of spit, twisting and turning, I decided that I had gone as far as I was going to and gave up with the capsules barely inside.

We left the hotel with plenty of time to spare, arriving nearly half an hour early. 6.45am but the hospital was buzzing, staff and patients scurrying everywhere. By 7am I was called in and by 8am I had been introduced to my Anaesthetist, a lovely Aussie woman who really cheered us all up. She explained that her face would be the last I would see as I went to sleep, and the first to see when I woke up. She was right about the first thing, but I never remember seeing her again. She asked me to confirm my name, and I replied, "I refuse to reveal my identity". She smiled.....and I was gone.

Surgery was planned at about 2 to 3 hours, however I was over 6 hours in Theatre. Beverley was frantic with worry as all friends and relatives were trying to get news from her. It transpired that they had problems reattaching my bladder to my urethra, which will now mean my Catheter staying in an extra week. I woke up in the recovery room which I have very little memory of, other than how nice and kind everyone seemed to be. Back on the ward I have little memory of that night, again, other than how nice all the nurses were, and how all the patients were trying to help each other through what were uncertain times. A male Urology ward is not a place for the feint hearted. Nobody really cares about how they walk around or what is hanging out, it's just accepted! I can't speak highly enough about all the people I met in my 2 days at Addenbrookes, and I know that even though I am at home now, they will be still doing it all again for someone else right now.

If you are having, or know someone who is having this surgery shortly, I really don't mind if you contact me to speak in more detail about it. It may help to calm some of your fears, as the whole procedure and recovery are remarkable.

At 6pm on Thursday we headed up to Grantham, to stay the night as part of our two stage journey home. A good idea because doing the 250 mile in one go would have been impossible. A bit of a panic on the Thursday after arriving in Grantham, the collection bag started to look very red and was filling with a larger amount of blood. After phoning the hospital I was told to 'jig around a bit' and try and clear the blockage by conventional plumbing means. To our relief this worked and it was such a beautiful site to see the bag becoming clear again as urine flowed freely through.

The remainder of the trip back to Penrith was a breeze, with plenty of pillows around me, Beverley's (almost) gentle driving, and those lovely painkillers! Still not passed anything solid since Wednesday morning, but occasional gas and taking laxatives twice a day, should soon see results. Beverley still has to give me an injection of a anti-blood clotting agent daily, and I have to wear those lovely surgical stockings for a few weeks yet, but roll on 10th when the Catheter comes out. Wishing for a 'dry' xmas could be more relevant than a 'white' one!

What next?.....The Blog will continue, weekly for now as there is still a journey to be had and work to be done in helping others. I made it onto the front page of the local paper today, because of the ongoing enquiry by the NHS into my 4 month wait locally before any treatment started. It is important to follow this through because nobody should have to go through the stress that I have been forced through since June. Luckily, the blog itself provides a great record of evidence on all that has occurred since that time.

In 6 weeks time, I go back to Addenbrookes hoping that the good news will be that there has been no trace of a spread to my lymph nodes. If there has, then the treatment goes off in a different direction again, but thankfully, there are still treatment options. All being well, this spread will not have taken place, and I will just have radiotherapy on the 'prostate bed', the operation site, which will last 33 days. My PSA will be measured every 3 months for the rest of my life, and while PSA levels remain below 0.05, I will be assumed to be cancer free!

Beverley has just been fantastic throughout all of this. She couldn't have looked after me better in anyway. She was very loving and sympathetic when needed, but also knew when to give me a good bollocking and kick up the arse. Getting through this without her would have been a big ask; she is a very special person. 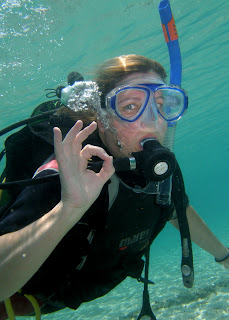