Beverley's Dad died this week; a very sad time for her and her family. Some of the events during these last few days took me back in time to when my own Father died, over 20 years back. It makes you pause for a while and think specifically about 'time', all that it means, how precious it is, and how little of it there is for us as individuals. When I was young it seemed like an endless supply that could be wasted without thought. Hours sitting in front of  TV watching crap, or putting a pinch of sugar outside an ants nest, then laying there for hours watching them carry each grain back into the nest. Then when older, filling out meaningless risk assessments, sitting through hours of health and safety lectures, or sitting in a room full of people, who you didn't want to be with, pinching yourself to keep awake while one person droned on about themselves for hours. You were always too polite to walk out, weren't you? Wouldn't it be great if we could get credits back for all those wasted hours? I would probably be 148 before I died. I am far more selective with time now, and if you are in my company, you sure as hell know it's because I want to be with you.
The best part of this week beyond doubt, has been that Beverley has just found her younger sister after losing contact many years ago. Now as her sister's 'next of kin', her Father no longer holding that position, she was able to trace her in a single day and even talk to her! What a fantastic good to come out of such a sad occasion. Thanks Sasha, for suggesting the method by which she was traced.
My friend Andrew gets his results at Addenbrookes this Monday and I know he is bricking it! I still have to wait until a week on Monday for mine. It wasn't bothering me too much but as each day gets closer, I feel more sick inside every time I think of it. "Stay posotive'' I hear everyone say, and I do so most of the time. But I know that the results are in a file down in Cambridge, and they have been there since before Christmas, and those results will not change. I have to say that I feel good physically though. If I get the 'all clear for now' on the 24th, I will then embark on some serious exercise!
I am now officially, a McMillan Volunteer. I had an interview with Sue earlier this week, and I am going to not only give presentations for the charity to schools and in workplaces, but take part in their active campaigns to make life easier for those who have, or have been affected by cancer. Sue said that she often starts her presentations by asking everyone in the audience to close their eyes. She then asks them to hold up their hand if they either have had cancer, or know of a close relative or friend who has. Then she asks them to open their eyes, and invariably, they awake to a sea of raised hands.
If you are about to get married and thinking of a 'double barralled' name, forget it, it's plain stupidity. It might seem trendy being called 'Anthony & Josephine Fothersgill-Smotherington', but when your son meets the daughter of 'Christopher & Miranda Pleasance-Dogbreath' and they marry with the same crazy intention towards names as you, their little boy, Douglas Fothersgill-Smotherington-Pleasance-Dogbreath will struggle with the name on his football shirt. And his Grandchildren will probably stay indoors. So get real, just keep the name you were born with!
Star of the week, what would I do without her........... 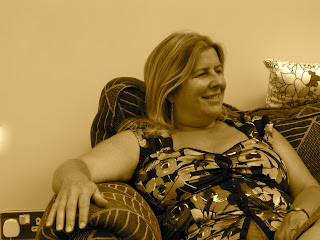 When to post the next Blog? I guess that Tuesday 25th January might be a good day! The day after I talk to my consultant; the day I am sort of looking forward to, but then again ...............
﻿﻿I've just noticed, we have 29 official followers on the Blog, though I know that hundreds look in regularly from all around the world. Come on, who's going to make it 30?
Posted by Daniel Sencier at Saturday, January 15, 2011