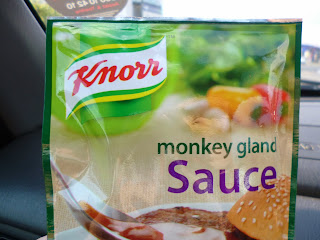 It's been one of those strange days! The news this morning told of how gays in Utah were celebrating the right to get married while at the same time in Uganda, either being a gay or knowingly hiding the fact that someone else was gay, carried a life sentance. On the bright side, it used to be death by firing squad! Canada has just relaxed it's prostitution laws while Spain has tightened up it's abortion legislation. The same day in Nigeria, a 'baby for sale' factory was uncovered containing 19 women all about to 'pop one out' within the next 2 months. Then, I'm informed on the Prostate Cancer charity site that oral hygiene could contribute to the disease! If I'd known, I'd have used more floss!
So why should it come as a surprise that Beverley found 'Monkey Gland' sauce at the local supermarket? It just had to happen!
Posted by Daniel Sencier at Saturday, December 21, 2013