The wake was amazing….

Don't write a blog when you're pissed…. I'm glad I waited a few days because had I published Monday night…. well it just wouldn't have worked…...

I went with Beverley on Monday morning to St Charles Roman Catholic Church, the most beautiful of buildings. After looking around I wanted time to myself, so Beverley drifted off around the outside to explore. I sat at the front near the alter, trying to figure out what I was suppose to be thinking. I'd said all my goodbyes to my Mum, it was as though the funeral had taken place already!   It was nice to have time to reflect on my Mum's life and what she meant to me. Sometimes I smiled to myself, other times were a little sad but reflection was important because some memories I could only share with myself. Like when I was a little boy, about 7 and I went to a public toilet. I heard a hissing sound but having never heard the fuse of a firework burning down, I didn't realise my mum was about to flick a chinese cracker under the door. It shot around the cubicle, each bang propelling it to the next wall, floor or ceiling, each crack echoing louder in the hollowness of the toilet. By the time it'd stopped I'd done my business (everywhere). A person with a weaker heart may have died!
After a while I went and lit a candle for my Mum as I had done in years gone by in many churches around the world. I noticed 14 other candles already lit and wondered what the the stories behind those were. I then left a message in the book of remembrance before meeting Beverley's smiley face in the sunshine outside.

We then met up with Julie and Allan and all went to Gilroy's Irish Bar, where we had the best time imaginable.


Gilroy himself announced my Mother's wake and everyone in the place, around 300, stood up to toast her passing. Then they dedicated an Irish favourite to my Mum, 'Ellen Laffan', she would have loved that. We drank all afternoon with some of the friendliest people I'd ever met, singing and dancing until we couldn't dance any more. Gilroy was born in Liverpool to an Irish family and moved over here many years ago. He used to have hits in the 60's over in England, I need to research him a bit more, but what a character! All the music was from the 60's, a hell of a mix but the place was jumping and Beverley and I danced until we dropped! 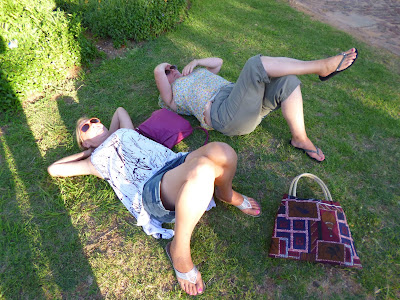 Getting home was fun, our taxi just didn't show up so we ended up in a minibus that picks up mainly black South Africans from the roadsides. It felt safe enough but the young girl in the back convinced me it wasn't our safest option of getting home; but I explained that right now it was our only option, to which she laughed. On the way the driver did a drop off in what was the first real shanty town I'd ever seen. Imagine a large allotment in England, and I mean very large, well the buildings were not as posh as that and they were crammed together, almost as if bulldozed from every side so that the corrugated metal, planks of wood and anything else that could make a wall just seemed to balance. Our taxi driver eventually found us waiting for the next mini bus, which was fortunate as I wouldn't have liked to be where we were after dark.

Sasha called me half way through the wake, which was just great and Chantal and Luci, who went to the service checked in by Skype later. Three of the loveliest kids that anyone could ever wish for. Thanks girls! xxxxxx


So all in all not a bad week and one that has certainly united the Sencier family. From the very first day, just getting those precious phone calls from my brothers and sister saying that Mum had passed away, made me feel as though I was no longer alone. I'd had the honour of supporting both Paul and Andre through some very bad times over recent years, so it was good to see them come to my rescue, which I knew they would. We'd never been that close a family so this was especially nice and Mum would have loved to see this reunification. She named Paul and I as joint executors, this showed she had faith and trust in us both to look after things for her when she had gone. We planned the funeral just as we thought she might have wanted it and it was good that all four of us had input into the order of service and to have chosen the songs and prayers that we all knew our Mum liked so much.
She had left a letter saying she had no favourites which was lovely of her, so it was fitting that we all had a part in the funeral arrangements. Chantal and Luci said that it was a lovely family day both at the church and the crematorium, and everyone was asking for me, which was just great. I must take full responsibility for Chantal's name being spelt wrong on the order of service, I was asked to look it over before it went to print and I just don't know how I missed that! I wonder if Mary and David were there, or Teresa? I know that Paddy, Betty and Maria were, I must have mislaid the guest list amongst the vast amount of other information that I recieved from East Anglia that week.
I do appreciate all the work they put in on the ground while I was so far away, it can't have been easy, but once again Paul, Andre and Jacqueline thank you so much for everything. Because of your efforts I will always remember Mum's special day knowing that even she would have a chuckle reading this.
Posted by Daniel Sencier at Tuesday, December 17, 2013