They ejected their wings... 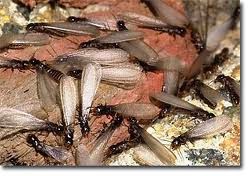 I caught an insect in the kitchen tonight, it   looked like a dragon fly when in flight and nearly as big. I opened the window to throw it out and 4 of his mates immediately flew in and a thousand more wanted to follow. I managed to put a glass over the 4 that got in and that's when the amazing thing happened. One by one they just ejected their wings and started running around like wee beetles, their bodies about an inch long. I've since found they are termites and swarm when conditions are right for breeding. Not in my house you don't!
Posted by Daniel Sencier at Thursday, December 19, 2013