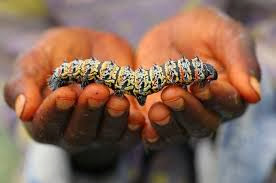 I was trying to decide between a plate of wild african mushrooms covered in cheese or a bowl full of Mopane Worms simmered in garlic, when we were interrupted by such a cheerful chap. Sol Rachilo introduced himself, a local poet but one of international acclaim, he went on to tell us all about his work. He left us with one of his poems, 'Marikana Massacre' which also appears in his latest book, 'Home at last in Soweto; has the dust settled?' You can buy this on Amazon and also at The Apartheid Museum, Hector Pieterson Memorial Soweto Theatre Foyer and Solrhabooks in Newtwon. 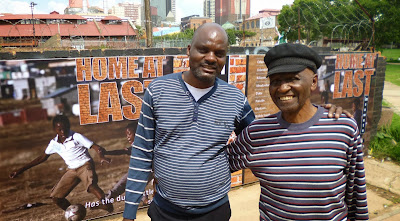 It was a pleasure to take a photo of the man himself here on the right accompanied by a close friend of his and in the background on the wall his work is advertised.
He made his name as a TV actor and did some radio but increasingly found himself  an 'Arts Activist', portraying amongst other things the terrible times suffered by the students of Soweto in the 1976 uprising. "We shall overcome", was their defiant cry, but only without great loss until aparthied was eventually overturned in 1994. A true pleasure to meet such a prominent Sophiatown gentleman and an incredible feeling that we live in Northcliff, right next to the district of Soweto.

You guessed, I went for the mushrooms, maybe the worms another time after a few more drinks... 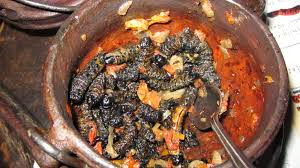