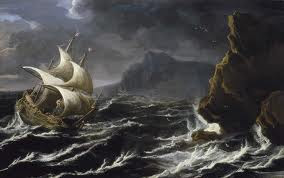 As soon as I woke up this morning I was back on that ship in the North Sea. It's been an hour now and it's still with me, the feeling that I am floating rather than walking. The drug that the doctor gave me, Prochlorperazine, I have thrown in the bin. I looked it up online and discovered, that in small amounts it is used to stop people feeling sick, but I don't feel sick. In larger amounts this drug is used to treat psychiatric illness. Having suffered from depression at one time in my life, and taken antidepressants, I am very reluctant to ever take tablets like that again. Though at the time, I am not sure if I could have got through those dark days without them.
Today, I am writing my blog using some software called 'Macspeech dictate'. It is a very funny and weird experience, because as well as saying the words I have to say the punctuation. It is very accurate, far more accurate than similar software that I tried 10 years ago, when every other word was misspelled. It is difficult to know what to do with my hands as I sit in front of the laptop speaking. It doesn't feel natural, and I'm not sure whether it will come across as natural when you are reading this.
I went into a cafe yesterday, fancying a nice cup of tea and a toasted teacake. When I placed my order with the waitress, she asked, “would you like jam and butter or just butter”. This is where the fun started, because I thought she said, “would you like German butter or just butter”. I was thinking, how innovative for a small town tearoom to be stocking alternative butters. So I said, “I'll try the German butter, I've never had that before”. She didn't pick up on the fact that I'd said German butter, if you say it yourself you will see how close it sounds to jam and butter. She was probably wondering where I had spent my life, never having tried jam and butter before.
When she delivered my order to the table, I noticed that the butter was Irish, Kerrygold. So I said, “excuse me the butter is Irish”. She replied, “would you like English butter”. I said, “no, I was hoping for German butter”. This time, because of the context that I had used the word in, she took German to mean German; rolled her eyes and walked away.
She gave me that kind of look where she couldn't decide whether I had just escaped from a local mental home, or I was just a prat! As I sat sipping my tea, I knew that all was not right, I had missed something. When it dawned on me I burst out laughing, and on the way out, I tried to explain to the waitress, but I just dug that hole which brought me closer to her, 'escaped from the mental home' theory.
Sometimes it can be very funny when people misunderstand, I found this many times when on holiday in the USA. At one store I asked if they had any maps, not realising that the American pronunciation of 'map' sounds like our 'mop'. As the assistant walked through the supermarket with me, she said, "we have dozens of different kinds of maps, what kind are you looking for". “Oh just one that covers the whole area really, from here to Savannah”. My reply seemed to confuse her and even made her slightly nervous of me. All became clear when sure enough, we arrived at the aisle where there were dozens of mops. I said, "Oh you thought I said mops", she looked even more confused, until I explained, then she burst out laughing.
When I introduce myself as 'Dan' in America, they pronounce it 'Don'. I was in a restaurant one night and took a pause halfway through my dinner. The waiter came up behind me and said, “are you done”? Thinking that he had said, 'are you Dan', I replied, “yes”. He then picked up my plate with my half finished meal, and started to walk away as I shouted after him. At the time I wondered how he knew my name!
Well we must be coming into port now, because the house has stopped rocking and I almost feel as if I'm back on land. A fish finger sandwich with plenty of tomato sauce and a nice cup of tea should settle my head for the afternoon.
It's all about Pope Benedict on the radio just now, can I cope with any more of it? I come from a very Catholic family, and was christened Catholic when I was a baby. It's like being a member of a big worldwide club, and any country that I visit seems to have some evidence of Catholicism. I'm not sure where I fit in to the bigger picture, or if I fit in at all. Members of organised religions all seems so intolerant if you don't happen to be in their fold. I find it all very hypocritical, because if you are a member of any organised religion, surely you should be tolerant and want to reach out to others, and not close your doors on them? My father told me that, 'life is simple, there are good people and bad people'. Is it that simple?
Posted by Daniel Sencier at Friday, September 17, 2010