What was it like at the Lizard today? I don't know, we didn't go. It was wet and very windy in the morning so the days were reshuffled and the Lizard is now tomorrow.
We are winning 3 - 0 at snooker now by the way!
So the day started with a drive to an ancient woodland site (Steeple Woods). The rain held off as we explored the area and I now have a strong dislike of rhododendrons! Some amazing old trees, and there used to be many more until the human rats came along. We headed down to Newquay after that to see if any Grey Seals were hanging around the harbour as they often do. Newquay is the 'chav magnet' of Cornwall, every county needs one and in Cumbria, Carlisle serves that purpose. Without these key points full of bars, betting shops, amusement arcades and fast food outlets, the chavs would roam out into the more beautiful areas of these counties.
Alas we only saw one seal who popped it's head up and then dived as we all aimed our cameras on him at the same time. As far as he was concerned we had six loaded shotguns. Goodbye!
We had fish and chips for lunch, what else?
We decided to drive back along the coast road as a few of us needed to get film footage of some rough seas breaking on the rocks. 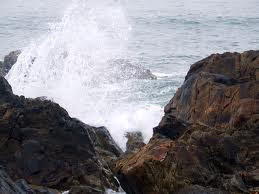 We weren't to be disappointed, after 2 miles there was a formation that gave us everything we needed. Giant waves boomed into the enormous rocks, throwing thousands of gallons of water high into the sky. It was as if it were pouring with rain.
That is where Josh decided to become one with nature, and he almost succeeded! (film on facebook)
So it's off to the Lizard tomorrow and see what the day brings. More fish and chips for sure! I'm knackered!
Posted by Daniel Sencier at Wednesday, April 18, 2012