Armed police came to the house...

Sad to see Alex, Rowan and Wendy leave for the airport just now, but on the bright side the toilet queue in the morning will be easier. How did they fit all those cases in that tiny hire car…Oh yes, our other vehicle was nicked right from outside the house yesterday! That wasn’t the worse of it; Alex’s passport was in the glove compartment, requiring two return trips to the UK High Commission in Pretoria to get a temporary one-day travel passport home. £95!! Yes, you don’t have to be in the UK to get screwed by our Government, they’ll do it for you at any embassy around the world. Security was tight, it needed to be because just last week they had the brass sign stolen from the main entrance! After handing in our phones and cameras, we were given passes and a key, then given directions. When we finally reached a locked door, we guessed this must be the reason for the key, which puzzled us all at the entrance when they gave it to us. Alex tried the key first, then I had a go; no luck! Then a voice behind said, "Can I help you?" We explained that we were given directions at the gate and handed this key. She explained that the key was for the locker that our phones had been secured in. Embarrassing wasn't the word!

Earlier that they, after the car had been nicked, armed police had come to the house, gathered all the details and then Alex and I had to go down to Brixton police station to get proof that he had reported his passport stolen. They were very nice to us and we shook hands before we left; always a good gesture to someone holding a firearm! 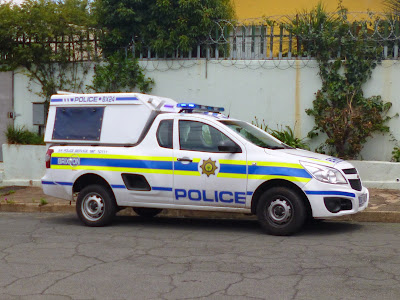 I know I go on about the prices over here but I can’t help it, it makes me mad! The local Co-op in Penrith is where I sometimes used to pick up a bottle of merlot and a sauvignon blanc for around £12.50. I have come to like a good mid range brand here called ‘Robertson’s’, which is easily better than anything I’ve tried back home. I bought 2 x 3 litre boxes yesterday, total £8.50! 6 litres for £8.50!

On the way out Beverley paid for the car park, about 20 pence an hour, but forgot to pull the ticket from the machine. When we got to the barrier, no ticket! Where was it? The queue started to build up, horns started to beep and a friendly onlooker suggested we drive out through the ‘idiot lane’, a diversion for stupid people like us, leading back into the car park. I had put my hazard warning lights on and as we parked up, Alex had run back to the machine and found the ticket on the floor. Off we went again, and this time the barrier worked. There was an accident at the junction, an extremely regular site, and it was one of those where you take it in turn on a first come basis. Of course unknowingly, I still had my hazard lights on so nobody could figure which direction I wanted to go in, and we were close to home before it clicked. By then, Wendy and Beverley in the back seat had drilled me with their beaks and with both of them in full flight, and the sat nav filling any spaces left, I got home dazed and confused.

When we got back, the Indian lady who had previously backed into our hire car last week, was now standing in the middle of the road shaking. After telling us to, “Be very careful, you’re not used to Johannesburg”, someone had overtaken her as she was turning right and ripped the front end of her car off. Within minutes the street was full of police again, 3rd incident in 10 days, very exciting. I’m guessing that if the BBC's ‘Crime Watch’ was brought over here, never mind once a month, they could reserve a whole channel, full time! Still, we haven't been mugged or shot at yet, but early days; I still love it here!

Another amazing display of lightning last night, but this time in the early hours. We opened the curtain and just enjoyed it; there was as much chance of going to sleep at a Wildhearts concert in full swing. Just check them out here at  http://www.thewildhearts.com/ and you'll understand!


My son-in-law Ceej is part of this mental band who still fill concerts around the world.
On the business front there is loads going on but still nothing I can bring into the open yet, but if you’d like to visit http://www.sunbird-sa.co.za/ you’ll learn what it’s all about. Allan, Julie and Beverley are all working extremely hard towards multiple goals right now, groundbreaking stuff with massive interest. Me? Right now I’m doing anything to help where I can. Press/Media relations officer, photographer, videographer, tea-man, shop fitter, researcher, blogger, taxi driver; I’m having a lot of fun. :-)
Posted by Daniel Sencier at Thursday, November 21, 2013