Have you ever heard of the Violin Spider?... 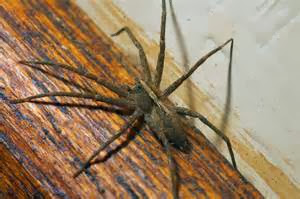 Turns out the bites on my ankle were not from a mozza, but from a spider, with the 'Violin Spider' top suspect.

They are common in most gardens and that's why in South Africa you should never wear open footwear in long grass. (Nobody told me!)

It was when I went back to see the pharmacist Dave, that I discovered this. He said, "If you don't go to a doctor, I'll march you there myself." As luck would have it the doctor's surgery was next door, like a mini hospital with dentist, nurses and an x-ray department. No appointment required, you sit in the waiting room and everyone is seen in turn. The Doc told me that if I'd waited another few days I would haver been in hospital, and by the end of the week if I wasn't dead I would have lost both feet! A lovely guy, we talked about all sorts and he wanted to know all the comparisons to the UK. I left with 3 prescriptions, strong course of antibiotics, a cream to aid recovery and antihistamine to stop itching. £24 was the doctors fee and the drugs total came to around £12; not bad I thought. The pharmacist called all his colleagues around the other side of the counter, they hadn't known anyone stupid enough to get bitten by a spider in recent years so I was a real training opportunity. I also met a lovely woman in the waiting room who gave me the complete idiots guide to living in this beautiful country.

Armed police accompanied by soldiers with heavy weapons greeted me outside the supermarket yesterday morning. I enquired at the check out as to what was going on, and apparently they'd had a tip off that they'd had word of a planned bank robbery. I would have changed my mind too!

The house is far nosier now the woman are all back in the country. Last night we had a celebration of their successful business trip, a lovely meal at Poppies where we seem to eat so often they treat us like dignitaries.

I managed a Skype with Chantal and Sasha today which was just great to see their wee smily faces, along with Quincey. Hard to believe they are nearly 6,000 miles away, but as it's developing we seem to have more contact than when I lived in the country.

The two lads Alex and Rowan go back to the UK on Thursday, I'll miss their company, we've had some laughs. I think they are both planning to come back when the work starts in peak summer, mid January!!

Looks like I may have found a temporary niche roll in that we are opening a shop in Melville to sell solar powered sytems. £400 a month for the let of the shop (wake up UK) and smell the business! Marketing is marketing and I've plenty of experience in setting up new pubs, the same skill sets apply, don't you think? So what do we call the shop??