They will always remember how you made them feel... 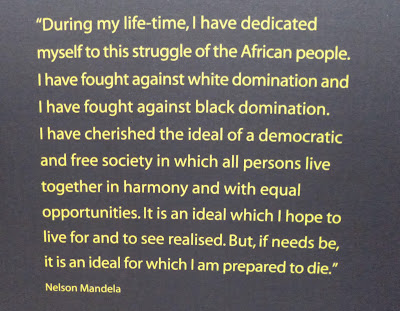 You know that saying…"They won't remember what you said, but they will always remember how you made them feel"? Isn't that so true? Some people are gifted with better memories than others, that's also true, but when you think of any individual you know, you get an immediate feeling, usually good, sometimes bad or maybe in between. That feeling is made up of many factors, such as how much respect they've shown you over time, how much they've listened to you instead of just talking over you, what they say to others about you, the kindness they show to complete strangers and the value they give to the opinion of others..…the list is endless, but you know what I mean. Well that explains how we felt when we left the National Apartheid Museum in Jozi today. It was vast in size as was the amount of information relayed in every form, but when we walked out of that place, Beverley and I felt emotionally stunned, like we'd been there in the early 90's and now had to come to terms with what we'd seen and experienced and then somehow over the coming weeks try and recover as we view the country and it's people through different eyes. Nelson Mandela? No words would ever be adequate. 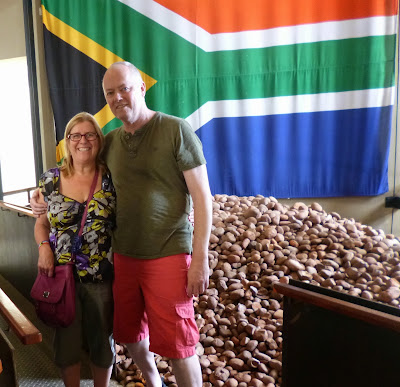 Nice lunch after that, both had a pizza and brought home half of each for later. As we were eating, I took the opportunity to feed an unusual bird that kept flitting out and back under the table. Beverley said nothing, she usually bollocks me for giving my lunch away but she sat there smiling, turning to outright laughter when I realised 'the bird' was a paper bag!

Excitement in the house tonight as we prepare to catch up on Downton Abbey, we've found how to get it on the iplayer here and it was the only programme we ever really liked in England. We had a wee fix from England earlier when Beverley had to Skype the Co-op in Penrith because they kept leaving messages about some carpets. It was pure magic to hear an accent that I could understand so easily; and only after 2 weeks!

At last, captured on film in the back garden, the 'Grey Go Away Bird'. This is the guy that wakes us up at dawn with a shriek that conjures up a Pterodactyl in our dreams.