They do 'Theme Parks' very well down here...

Got a few little mozzer bites on the legs yesterday, didn’t think much of it, woke up with ankles like a crippled rhino. The chemist says that antihistamine might do it and he’s given me a strong dose, but he warned me to see a doctor if no improvement by tomorrow. He said both legs are badly infected and without antibiotics I could lose my feet! Not the reassuring thought I was looking for. You don't need an appointment to see a doc here, you just show up and pay a small fee.

So it was the theme park that took our fancy today and what fun we had. If you’ve ever been on the Irn-Bru ‘Revolution’ at Blackpool then this is similar, but bigger, nosier and faster. We first went on before our lunch and then decided to try it again after. As we suspected it was easier with an empty stomach. You accelerate from what feels like 0 to 60 in about 3 seconds before you’re fired around a giant but very tight loop, coming to a halt on a dead end vertical rail! 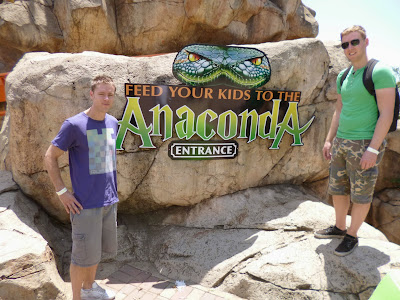 You then drop down backwards around the same loop, wiz through the start point and up another dead end vertical rail, before plunging back to the start. Breath-taking! The park was massive with 35 different rides and not much of a wait  on any. Cost the equivalent of £10 each for a full day of rides and as with everywhere in this country, staff were abundant to help at all times. Rowan and Alex went on the ‘Anaconda’, which is the one I gave a miss, but we got around as many as we could and had a great time.

Things appear to be going well on the mission for Beverley, Julie, Alan and Wendy, very positive news coming back daily and looks like we will have to fly to a big meeting of African states in Switzerland in a couple of weeks. Why not somewhere a little more central I thought, I want to stay in the Sun, please!! I'm told that November is a lovely month, rarely going above 30c, but wait until mid summer in January!

Going out for some dinner shortly, hoping my feet don’t drop off before I can walk home. Could be my imagination but they seem slightly more comfortable after the drug 2 hours ago. Paul, I waited on Skype for 2 hours for you!! Try and catch you another time :-)