We made it to the bar just in time last night, looking at the sky we knew something dramatic was about to happen. The clouds were very dark, moving fast, and the light breeze suddenly picked up as the first flashes of lightening were followed by a deep distant rumble. I’ve never seen the likes of what followed, but the locals say that the ‘rainy season’ is on for the next few months. It doesn’t mean it rains every day, just maybe once a week and nearly always in the evening; the rest of the time the skies are clear. The rain that fell in three hours last night was equivalent to a week’s heavy rain in the UK. The lightening was constant just flickering like a bunch of press photographers up close, and the thunder was shuddering; it made your body tremble! No words can describe it, the giant crack followed by the sound of a stampeding buffalo heard, amplified a thousand times! Rain turned the main street into a river and soon turned to large hail stones. The pub had an outside toilet and you just had to go sooner or later, everyone returning wet but laughing at the excitement. Unfortunately we stayed in the pub far longer than we should and brought drink home with us, so today we are all mildly (no 'very') ill and feel like not doing too much.

I’ve been out in the garden with the 300m lens, you can sit there and an array of colourful birds will pop in from time to time. 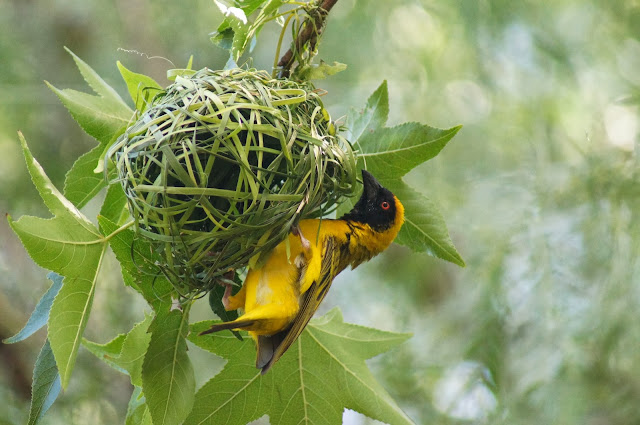 The ‘Weaver Bird’ has just started a nest and I got a few good shots of her, then a pair of ‘Grey Go Away Birds’ did exactly that before I could point the camera, but I’ll get them yet.

The battery in the jeep was flat this morning as we’d left the inside light on. It was also in the garage on a slope, so we had to brick the back wheels then as Alex released the handbrake, Freedom and I took the strain! We just managed to get it up the slope, out the garage and onto the road, which fortunately was a  hill. Alex flew down the hill, weaving from left to right then lifted the clutch allowing 2nd gear to crunch in and pump a huge black cloud out before the engine burst into life.

Breakfast was at 1pm, no tin opener so I had to stab the beans open, which went nicely with bacon, eggs, toast, mushrooms and a cuppa. Rowan wasn't quiet ready for food yet and the suggestion that he might like an egg sandwich seemed to hasten his progress to the toilet! We’ve almost finished the basket of fruit and it may be healthy but my system is just not used to it. It’s given my poo a sticky clay like consistency that has to be helped with the toilet brush at every visit.

Freedom is sorting out the BBQ, it needs a very large grill and he knows someone who can make us one for £10, would you believe! We can test that out at Sunday lunch along with the new garden furniture, when the others get back. I heard from Beverley today, all seems to be going well and they haven’t stopped for much rest, being shuffled about from government offices to schools and hospitals at a frantic pace. Only 2 sleeps before I see her sunshine smile again, can't wait.

Tomorrow we head out to the theme park where I’ll let the lads go mad on the rides and maybe try a few of the less extreme ones myself.
Posted by Daniel Sencier at Thursday, November 14, 2013