It's just fabulous that so many people follow this blog and probably three times as many follow it anonymously. The biggest thrill for me is when I get someone else on board as a named 'follower'. A big welcome to Sue, who is now part of the 'Inner Circle'; it's great to have you with us.

Well I learnt something about cancer that I didn't know the other day. Don't get me wrong, I rarely look the subject up now, (that's a lie!) but I was curious about this. As I have said, my dad died of prostate cancer and that is what it said on his death certificate. But by the time he died, it had spread everywhere. We were only able to donate his eyes in the end; his wish had been to donate everything possible. What I didn't realise is, when you get cancer of, let's say the liver, when the cancerous liver cells move around the body and take hold in, let's say the lungs, those cells grow in the lungs as cancerous liver cells. So the primary tumour is liver cancer and the secondary tumour is lung cancer. So you might die from the secondary tumour in your lungs, but it would say on your death certificate that you had died from liver cancer. Phew, did you follow that?

Hey, remember I told you about the old neolithic site at the back of that hotel last week. Well here is a photo of the guys who showed us around. The Onion peeler (what a job!) and the dishwashers and salad preparers who became our guides. Sorry, I'm still getting the hang of placing photos! 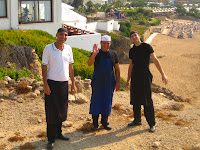 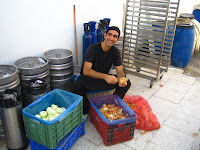